Starting a major or concentration

The concentration differs from the Latin American Studies major in that it does not require coursework in Spanish.

Academic Catalog
Department Website
What can i do with this major? 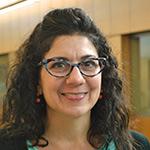