Chapter IV: The Hall in the Woods

BECAUSE of the isolation of Ladies’ Hall, off in the dense woods, without telephone connection or any means of protection, it was deemed wise to have a family living in the building. During the first year Professor Teisberg’s family took possession of the east half of the first floor. Eighteen girls and their preceptress occupied the rooms on the second floor, and had for a parlor the large southwest corner room downstairs.
It appears that during a part of Miss Margaret O’Brien’s reign as preceptress she had the courage to live with the girls in the Hall without male protection. Strange to say, we have no hair-raising tales from that period.
From the “Ladies’ Department” in the college catalogue for the year 1886-87 we quote: “The Ladies’ Hall is in charge of Miss Margaret O’Brien, an accomplished lady, who takes pleasure in making the Hall as attractive a home as possible for the lady students. Having studied vocal and instrumental music in the East, she is a competent teacher, and students have an excellent opportunity to pursue musical studies. Should a young lady desire to devote herself exclusively to the study of music, she may do so; but as a rule a careful selection of other studies is made by the teachers, and a program prepared for the lady students, suited to their requirements. In order to graduate, a young lady must, however, pass a satisfactory examination in all the studies comprising the course.”
The wild forest in the primitive days of the early 80’s was some place” to plant a ladies’ dormitory. The trees stood so close to the building that anyone climbing them could easily reach the roof or enter second story windows. Not that it was done, necessarily! It was quite possible for a girl “by a hop, skip, and jump from the back steps to land so far into the woods as to be out of sight” and off campus; for college property extended only a few rods beyond the Hall. It did happen that girls venturing into the forest primeval lost their sense of direction and spent an entire day finding their way back to civilization again. That was before they hit upon the plan of tying white rags on the trees to trace their way home. To be sure, it was for students a place quite free of distractions. No neighbors to hobnob with. No traffic to watch. No telephone calls to interrupt. No radios to add droning accompaniments to meditation and concentration. Not even a vista or a view to conjure up imaginations of the outside world. 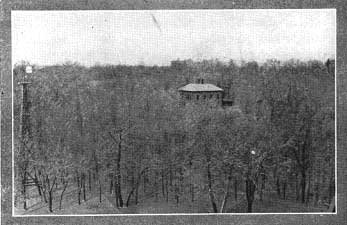 THE HALL IN THE WOODS 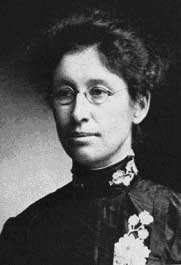 The Felland “front room” was practically a second parlor to the girls, on a several degrees higher scale than their own, directly across the hallway. Many were the parties enjoyed, formally and informally, in this room of culture and refinement. Many opportunities there were for stamping upon impressionable minds every feature of the hospitable “best room.” The large-flowered, brown ingrain carpet matched the brown paper on the walls. Heavy drapes at the windows, attached to wooden rings on wooden poles, blended nicely with the scheme of the room. The pictures that hung on single hooks high up near the ceiling, slanting out at a pronounced angle, were reproductions of works of art, such as Hoffman’s “Christ in the Temple,” Raphael’s “Sistine Madonna,” and “Faith, Hope, and Charity.” Some had peacock feathers stuck up behind them or dainty tidies hung over a corner. In the center of the ceiling a hanging lamp. Against the walls several tall, well-filled bookcases and a secretary with bookcase above. A platform rocker and other inviting “easy chairs” with their antimacassars. At the desk a swivel chair. There was a clock shelf hung with an embroidered velvet lambrequin, and a carved corner-shelf holding a statuette of “Rebecca at the well.” The two south windows were filled with flourishing plants on shelves and brackets. And, in the center of the room stood an ornate oak table on which reposed the big family Bible, a stereoscope — with views — and an elegant, large book on The History of Florence, bound in brilliant red, half morocco leather, with gold embossing. The base-burner stove was of such beauty of line and design that Professor Felland himself deemed it worthy of a photograph! 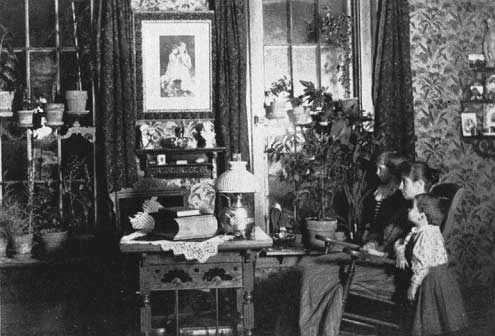 Perhaps all the commotion of the population within the house worried the young bride less than the wildness of the immediate out-of-doors. For several years she kept the back door locked against surprise intrusion of snakes, wild cats, and wolves! And burglars were not an unheard of possibility, either.
In 1888 while Professor Felland was on a trip in Europe, his wife spent the summer with her folks on the farm. During that period the vacated Hall was broken into. A gun was stolen, the roll-top desk plundered, and a bullet hole in the cellar stairway left as evidence. One wonders whether Pooh Bah would have put fright into the burglars had he been on the premises. The big, black Newfoundland, with a name borrowed from Gilbert and Sullivan’s opera “The Mikado,” was a sight to startle the most bold. When Professor Felland heard his growling, he got up at once to see who the intruder might be. The college paper, the Manitou Messenger, 1887, comments: “It is said that Pooh Bah is not liked very well by the girls, as he is apt to notice callers.” Mrs. Felland told of how Pooh Bah appeared on the scene when the ladies’-aiders were leaving her home one afternoon. Immediately there was a woman behind every tree! But it seems that Pooh Bah was not altogether dependable, to judge by items in the college paper. In January 1888, this: “Pooh Bah, an ornament of Ladies’ Hall and a terror to vagrants, is no longer an inhabitant of that establishment. He has taken lodgings in town.” In February 1888, this: “The ladies were pleasantly surprised lately by a visit from their old friend Pooh Bah. The meeting was a touching one.” But, in April 1888, this: “The croquet players regret that Pooh Bah is gone. Who can suggest something to take his place?”
As one might expect, there was also a pet cat at the Hall at one time. It, too, received its name from the “Mikado” and was called Yum-Yum. The Messenger verifies its existence by speaking of “the official cat of Ladies’ Hall, the pride and delight of that colony,” and goes so far as to suggest that the big, fat, black and white spotted cat be placed in a “Mew-seum! ” This cat — or any cat — was useful for one specific purpose. When the ladies’ aid had finished a quilt, the girls were permitted to stand around holding its edges and bounce the cat in it. The girl nearest the place where the cat jumped out was destined to be the next bride! It is quite evident that neither the dog nor the cat served very efficiently the purposes these domestic animals are expected to. Mr. H. Eliassen writing some recollections in the Messenger tells about how one summer night when Professor Felland was away, Mrs. Felland, fearful after the recent robbery, asked him to sleep in a bedroom across the corridor. She gave him a repeating Winchester for defense. Says Mr. Eliassen: “There were noises on all sides. I held my breath for a moment, felt for the combination of the rifle, decided I would use the butt end of it on the head of the first robber who came near enough. I heard footsteps around me, and other sounds, but nothing got within range. Never slept a wink, though, all night. Upon investigation next morning, I found it had been rats.”
The five Felland children who were born in the Hall could tell many anecdotes from their childhood home in the virgin forest. One of their most horrible memories is of the army worms. These pests came, literally, by the millions, marching in a compact body from south to north, crawling over — never around — every obstacle in their path. For three days they so completely covered the Hall that it looked as if painted gray instead of brown. The south entrance had to be kept closed. All who ventured outside carried umbrellas for protection and swept the sidewalk ahead of them as they walked. When the invaders had passed, the basswood trees were like weird skeletons, every leaf eaten off. 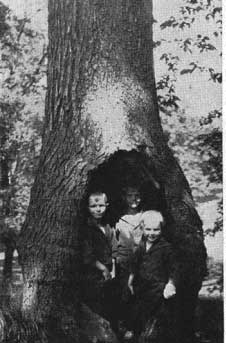 The Messenger for April 1911 has a poem on the Ladies’ Hall Elm, written by Frida Bue (Mrs. G. P. Homnes ):
“Stately and tall it stands,
A veteran guard on the hill-crest,
Bearing the marks of time
Yet showing a spirit unbroken.
Keeping a silent watch
O’er the paths converging beneath it.
Shielding from trespassing eyes
The time honored hall of the maidens.”

Oh, the tales it might tell
Were its murmurings comprehended.
Stories of wilderness times
When Indians roamed on the hillside;
Stories of sugar camp days
When the frolicsome youth of the village
Feasted on sweets of the maple
Cooled in a lingering snow drift.

“Decades have passed since then,
And bevies of fair young maidens,
Merry or grave, have passed
‘Neath the eye of this sentinel watchful,
And to each as she passed
The Elmtree has murmured its greetings,
Whispering gently of rest
In the shade of its wide spreading branches.

“Long be thy life, O Elm,
And many future Manitou maidens,
Though in more sumptuous halls
Their merry young lives be sheltered,
Love and revere thee as we
Who mid tears and its laughters
Dwelt in the dear old Hall
Which thou hast so faithfully guarded.” 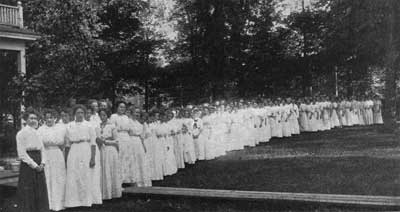 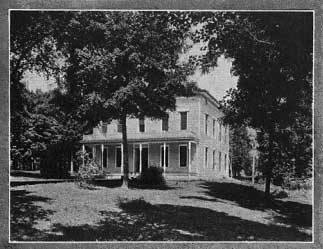