n July 7, 1886, Prof. Halvor T. Ytterboe and I were married in the Calmar church [Washington Prairie Lutheran Church, Calmar, Iowa], by Rev. V. Koren who had baptized and confirmed us both. Carlo Sperati, now Dr. Sperati of Luther College, played the wedding march. The wedding dinner was served at my old home in Calmar.

On Aug. 25 we left Calmar for our future home at St. Olaf’s School, where Ytterboe had already taught for four years. It was with much joy I looked for­ward to seeing Northfield and St. Olaf again. I was curious to see how that building would look on the hill, the cornerstone of which I had seen laid some ten years before.

It was a beautiful sight that met my eye as I looked out of the [train] car window on the other side of Dundas and caught sight of the Old Main. It stood there so majestic, like a castle amongst the trees. Here we spent the first thirteen years of our married life. Happy years they were. Here our four children were born.

At the station we were met by my aunt and uncle [Anna and Thorbjørn Mohn]. One of the first remarks my aunt made was, “How small you are, Elise!” It may have been the contrast
—Ytterboe was six feet two. We were taken by hack up to St. Olaf where we met Prof. Ingebrikt Grose, who had come to make arrangements for teaching the next year. We had supper together at Mohn’s.

After supper we were shown to the rooms on first floor in the Northeast corner of the building [Old Main]. There were three rooms set aside for us: a living room, a sleeping room, and a combined dining room and kitchen, the latter opening on the front hall as you entered from the east. They were very pleasant rooms. The Old Main and the Ladies’ Hall were the only two buildings on the hill at that time. Old Main was used for many purposes. The third floor was the boys’ dormitory, the second floor was used for class rooms and Chapel—the Chap­el occupied the southwest quarter of that floor.

First floor had the president’s living rooms and office on the southeast, ours on the northeast, the west half being used for music studio, a room for the music teacher, matron’s room, and room for the kitchen help, besides a spare bedroom. In the center of the Old Main first floor hall, where the halls crossed, a big coal stove stood. I didn’t like this so well because the students would have many a discussion around the coal stove which disturbed me often.

There were very few conveniences. Wood for fuel had to be carried from the woodpile a block away to the west, and water was carried from a tank pumped up by a windmill, also a block to the west of the building. 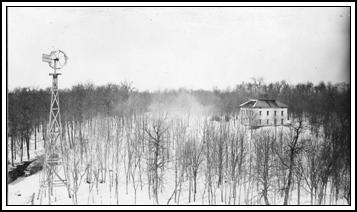 A couple of years later a ditch was dug, mostly the work of students, and a pipe laid from the windmill into the school’s kitchen and so water was brought into the kitchen. When that was done, we felt we lived in clover, especially in the winter time.

This convenience was quite interesting to the students. I remember one young man in his Sunday best, wearing a stiff shirt front—the style just then—coming in for a drink. I advised him to turn on the water slowly; he seemed to think he knew how, and held the cup close to the faucet and turned on the water full force. He was drenched and his stiff shirt front likewise.

Folkemödet
Those were busy days, the latter part of August and early September 1886. About the middle of August a small cyclone had gone over these parts and ripped the tin roof off the building [Old Main] and done other damage; also taken down the windmill for one thing, so the place was not in the best condition and much work had to be done.

The college department was to start—more teachers had to be secured, and it was decided that the new Theological School also should locate here. Where should one find room for all? Where there is a will there is a way, and so it proved in this case. The theological Profs and their families secured homes below the hill, as also did the theological students who had families. Classrooms were crowded on second floor and two rooms were given to the two theological Profs for their use.

Just before the opening of school a large meeting (Folkemödet) was held in the Old Main to decide on what to do with the schools for the faction that had gone out of the Norwegian Synod that summer. 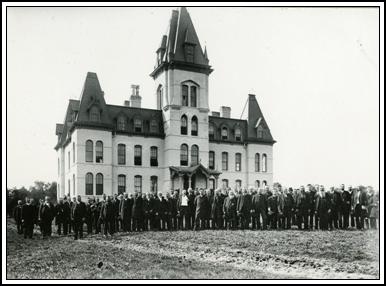 The trustees of St. Olaf had offered the use of this Academy to start a college department and might also make room for the divinity school until further arrangements could be made.

Dr. F.A. Schmidt had already withdrawn from the Theological Seminary at Madison, Wisconsin, and moved to Northfield. Dr. Bøckman had been engaged as the new Prof and was ready to move from his call at Gol Lutheran Church, Goodhue County. There were many things to be arranged at this meeting.

When this meeting opened it rained and poured. No one was able to leave the building, and so we had to find sleeping room for all. Several slept on the floors in the class rooms, three pastors slept on the double couch in our living room, three others in our own bedroom while we slept on the kitchen floor. [Elise was expecting at this time.] Rev. Peer Strømme walked in and asked, “Where am I to stay?” I replied that all we had to offer was one of my cushioned chairs. He said, “That’s fine. I have slept in a chair many a night.”

Rev. Peer Strømme
He was a jovial and interesting man, had a remarkable memory and could quote and repeat whole chapters of Dickens, and loved to do so.

He did not teach very long as class work seemed too confining and he was such an interesting teacher that time went too fast for him and his students [1887-1888]. His specialty was writing and storytelling.

Strømme was a lover of chess and could sit by the hour playing if any one could find the time to spend with him. He and Ytterboe could sit hour after hour playing and not saying a word. Strømme could sit up all night and play and be fresh in the morning. He was strong, while Ytterboe had to have his rest, so I did not appreciate the games.

While teaching here he was offered an editorial position for one of the leading papers in Chicago [Norden], and that was more to his liking than teaching, so he accepted that. He was greatly missed. Strømme was such a genial, warm-hearted interesting man, and we were always glad to have him come back for a visit, which he often did for a number of years.

Foul Weather Continues
The first year I was here we closed school a whole day because of bad weather. The janitor had gone to Farmington and could not get home again; such a quick storm came up. We had to get heat some way. School was dismis­sed and the boys shoveled towards the wood piles so as to get wood enough to heat the rooms. But they could not make more progress than to get enough to heat their own rooms, so the classrooms were closed.

The drifts were from six to ten feet high. The boys dug a regular tunnel to the wood piles, which were near the woods to the west of where the Art Building is now [Regents’ Hall site]. For the girls the boys shoveled a way to Old Main. The girls for a long time carried their own wood. After a while they thought that it was too much for them to do, and they had a boy work for his board.

He carried wood for them and put it in a big box on second floor. The janitor succeeded in getting back from Farmington on the next day, but he had difficulty. The snow was so solid that he could come back with a sleigh, driving on top of the drifts.