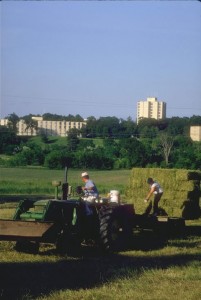 St. Olaf College owns over 700 acres of land in addition to our 300 acre campus. In the early 1990’s corn was the major crop grown here using conventional farming methods. Since then, close to half of this land has been placed in our Natural Lands program through restoration to native habitat (prairie, woodlands and wetlands). However, over 400 acres is currently rented to local farmers whose agricultural systems now include corn, soybeans and some alfalfa.
In 1993, a 44-acre parcel of farmland was converted from conventional agriculture (mainly corn using heavy tillage) to a more sustainable system of a four-crop/five-year rotation of corn, soybeans, oats/alfalfa, alfalfa, alfalfa (C-S-O/A-A-A) through a MN Department of Agriculture grant to Gene Bakko, former Curator of Natural Lands, and an arrangement for this project was made with a local farmer who included alfalfa in his rotation. Since then the college has become very supportive of the idea of encouraging sustainable agriculture and in 2004 asked farm renters to convert all its farmland to a corn-soybean rotation employing NO-TILL agriculture with the incorporation of more legume (alfalfa) in the rotation. In addition to improving our environmental stewardship of this valuable farmland, it has provided an outdoor laboratory for student research projects. 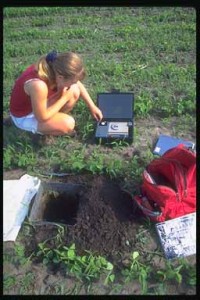 In 1992 environmental studies students Cherie Wieber and Derek Fisher conducted a feasibility study in which they interviewed farmers, collecting data on inputs, costs, labor time in the field, crop prices, yields, chemical use, etc. This study was instrumental in the conversion from a conventional (C) “corn only” system to a more sustainable rotation (C-S-O/A-A-A) system in 1993. A 3-year grant from the Minnesota Department of Agriculture’s Energy and Sustainable Agriculture Program enabled student research projects by Jan Nicholls (’94), Erica Wetzler (’95) and Ketil Rogn (’96), to study soil quality, soil organisms, crop production, economics, energy efficiency and other parameters. Briefly, these projects found that the corn-soybean-oats/alfalfa-alfalfa-alfalfa rotation reduced soil erosion over 60%, reduced energy consumption more than 20%, reduced chemical use 65%, and slightly increased overall yields and income per acre compared to growing corn only. However, time spent in farm labor was nearly three times greater for the sustainable operation meaning that one person could not farm as much land. Wendell Berry defines sustainable agriculture as “supporting both the land and the people.” The St. Olaf study demonstrated that adding a cover crop to the rotation significantly increased ecological sustainability, but market conditions have to change before farmers can obtain economical sustainability on a diverse rotation. 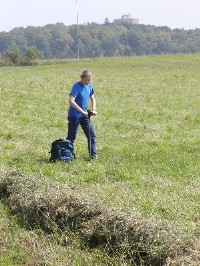 Ten years later, in 2003, another student interested in sustainable agriculture, Megan Gregory ‘04, measured the costs and benefits of converting from conventional to more sustainable agricultural methods. She compared soil characteristics, runoff water quality and nutrient fluxes, energy use, and overall productivity of four farm types: conventional corn only, conventional with corn-soybean rotation, rotational with 5 year corn-soybeans-oats/alfalfa-alfafa-alfalfa, and no-till corn/soybean rotation. Her research showed healthier soils, and lower energy use in no-till systems, along with equivalent profits. Results of her work convinced the St. Olaf administration to require farmers renting St. Olaf land to use no-till or strip-till farming methods, along with reduced fertilizer amounts, and led to a published paper (Gregory, Shea and Bakko 2005).

One of the farmers renting St. Olaf land under the new sustainable farming guidelines, Dave Legvold, is a former high school teacher and interested in working with St. Olaf students to develop “on-farm” research projects to improve local farming practices and educate students about farming. A number of St. Olaf students have been interested in working with a farmer to help address practical questions. Legvold has been willing to use farm fields he rents or owns as experimental laboratories and help students connect with additional farmers as needed for their projects. 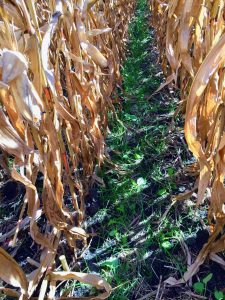 Each year a farmer has to make decisions about farming methods from type of tilling to how much fertilizer to apply and whether or not to use cover crops. Following are examples of some of the project findings by student researchers that may have practical “on-farm” applications for local farmers. Rebecca Spurr ‘11 confirmed that soil nitrogen levels improved with application by side-dressing (fertilizer is injected directly into the soil at the base of the plant) rather than dribbling. With increasing concerns about agricultural nitrate runoff into lakes, streams and rivers, Rachael Weime ’12, Emma Cornwall ’13 and Kate Seybold ’15 studied optimum levels of nitrogen fertilizer to use to decrease nitrate runoff and obtain the highest return on investment in 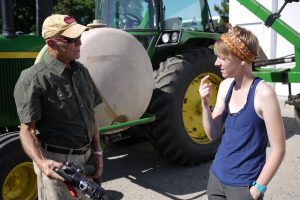 fertilizer. The “Corn Nitrogen Rate Calculator” from Iowa State University provides a starting point. While good corn yields do require nitrogen fertilizer application, these studies showed that adding 77 pounds per acre nitrogen fertilizer was optimal for the St. Olaf fields studied. Adding 90-120 pounds per acre increased costs, but did little to increase yield. Yield comparisons between a field with four years of continuous corn and a field with a second year of corn following alfalfa resulted in higher corn yields in the field with the alfalfa rotation, and showed the benefit of having a legume as part of the crop rotation. 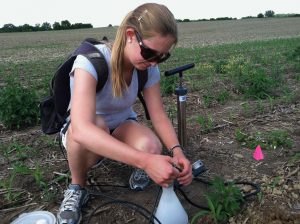 Other research projects investigated practices that are thought to improve soil health. In a study of fields that had been converted from conventional deep plowing to strip tillage for various periods of time Nora Flynn ’15 found that strip tilled fields have more permeable soils which soak up water more efficiently, reducing the loss of top soil and nutrients in rainwater runoff. Fields that had been strip tilled longer had higher percent soil moisture, lower soil temperature, and lower bulk density leading to better soil structure as a result of less intense tillage. Using cover crops is another practice in improve soil health and decrease nutrient runoff and soil erosion. 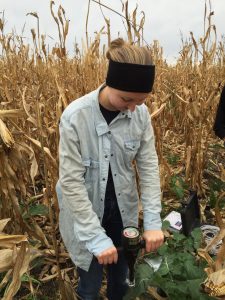 A one-year study by Kendra Klenz ’17 on soil health in corn fields grown with and without cover crops (a mix of annual rye, kale, radish and crimson clover seeds) found no significant yield variation in areas with and without cover crops. Changes in soil health occur slowly over many years and are influenced by soil type, cover crop
species, microbial and macroinvertebrate communities. This study showed no negative effects of cover crops on yields and suggested more research is needed over longer time periods to see effects on soil properties. 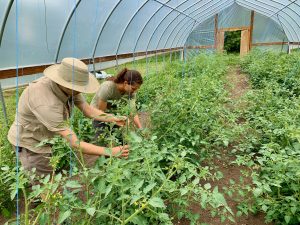 to grow produce at STOGROW, the St. Olaf student farm. The farm, located across from the Art Barn, near the wind turbine, has an area of about one acre to grow crops and a hoop house for season extension. Students working on the farm not only learn about growing crops, but they also learn about the business side of being a farmer. Produce is harvested and sold to the St. Olaf food service, Bon Appetit. The food service cooperates with the student farmers to help guide what they grow and uses the food produced in the student cafeteria. A local farmer and former St. Olaf student, Becca Carlson, runs SEEDS Farm and serves as an adviser to the STOGROW students. Classes at St. Olaf in Biology and Environmental Studies and other areas now incorporate information from these studies and field trips to the agriculture sites as part of their learning experiences.