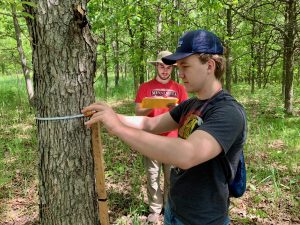 Over 100 acres (40 hectares) of trees have been planted as tree seedlings or by direct seeding with the goal of re-establishing the dominant maple-basswood forest type, also known as the “Big Woods” found in this area. The “Big Woods”, which once dominated this region of Minnesota, has been diminished to only small remnants of what once existed. St. Olaf’s restored forest areas consist of native hardwoods, such as oaks, maples, ash, basswood, cherry and walnut. A seven-acre (2.83 ha) parcel with native pines, spruce, fir, tamarack and aspen was planted to establish a representative northern Minnesota habitat. Norway Valley and areas near Heath Creek are maintained as examples of mature maple-basswood forest. 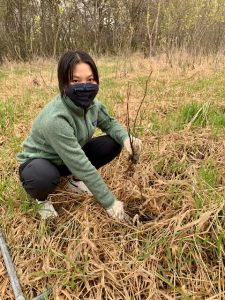 Most forest restoration occurs on land recently coming out of agricultural production. In order to prevent soil erosion, perennial grasses are planted before any trees are planted. Between 400 and 500 tree seedlings are planted per acre within three years of grass seeding. As documented by student research projects, the seedling survival rate two years after planting has generally been between 60-80 percent. Since 2001, Direct Tree Seeding has been conducted on about 30 acres (12 ha) of St. Olaf land. Nuts and other seed forms are scattered at a rate of about 35,000/acre with a germination rate over 50 percent. 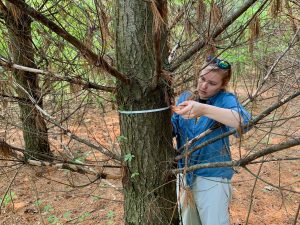 Regular surveys of tree growth have documented growth and survival patterns of trees in restored areas as described by Shea and Helgeson (2018). After 30 years the canopy is closing and the growth rate of shade tolerant trees such as sugar maple has increased. Although south of their natural range the planted conifers have grown quickly in open areas with little competition. 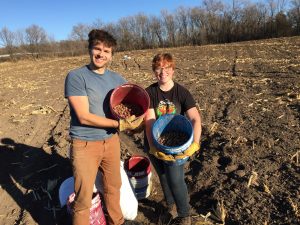 Maintaining restored habitats requires attention to weed and invasive species control. This problem diminishes after the habitat becomes more established. Deer can also cause considerable damage to your trees by browsing on terminal buds. Tree tubes and cards can be stapled around the bud reduce the damage. Deer especially like to browse on white pine and red oak.