Here are some fun insects that can be found around the Natural Lands. 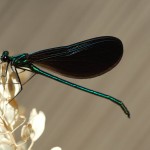 Smaller than dragonflies, they hold their wings folded over their back when resting. Similar eating habits as dragonflies but less aggressive. 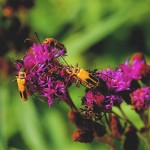 Closely related to the lightning bug. They feed on nectar, pollen and small insects. Here they are on Joe-Pye-Weed. 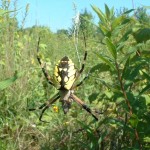 This is an orb weaver that makes complex webs of concentric circles. Also found in gardens as name implies. Females are up to 3″ in length including legs and 3-4 times larger than males. They only breed once and males are often consumed by the female after mating. He courts her by “plucking” her web strands. 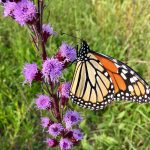 This monarch butterfly is feeding on Blazing Star, a native prairie plant. Monarch butterflies lay their eggs on milkweed. They are famous for traveling very long distance every year, with the North American monarchs ranging from southern Canada to northern South America. 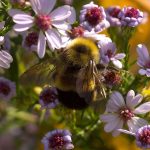 The rusty patched bumblebee is currently listed as endangered under the Endangered Species Act as of March 21, 2017. These bees collect nectar and pollen from flowering plants found in prairies and grasslands. 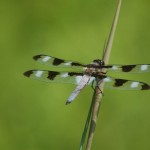 Larvae and adults are fearsome predators, pursuing most anything they can kill and eat. Larvae are known to kill and eat small fish while adults have been recorded to kill hummingbirds. However, usual prey are both larvae and adult insects. They kill many mosquitoes in both larval and adult stages. Dragonfllies hold their wings spread while resting. 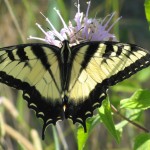 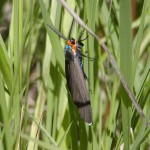