Katherine Villa ’16 will be presenting her work on procreative ethics.

Sam Benson will be presenting his paper ‘Who Do You Trust?: Expertise and the Pitfalls of Democratic Decision Making‘

Emma Ritter presented a paper on ‘The Progress Paradox: An Attempt to Provide the How And Why Behind the Vicious Pursuit of Virtue.’ Click here to download her paper.

Meredith Varie presented a draft of her paper on the fear of death in Epicureanism. Students engaged in a great discussion on Epicurean ethics. 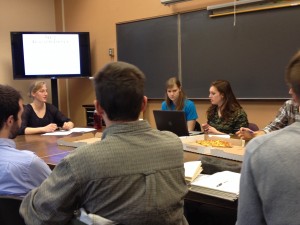 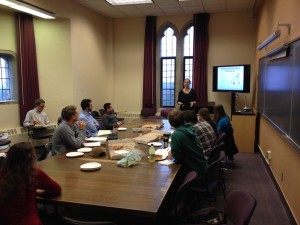 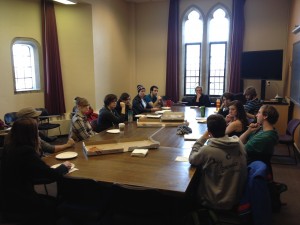 The first Phi Sigma Tau student colloquium of the year was on Thursday, December 12th, during community time from 11:30 am to 12:30 pm in Holland Hall 516. We discussed Thomas Lambert’s paper “Friendly Atheism: The Story of a Plane Crash,” which provided for a great, provocative discussion. Thomas argued against the idea of rational disagreement between a theist and an atheist – he claimed that an atheist cannot believe a theist has good reason to believe in God because this would involve recognizing compelling evidence for such a belief. This thesis raised some very interesting questions about the nature of rationality and the accessibility of evidence. The paper was clear and well argued, and he explained his views to the participants with great lucidity. Thanks, Thomas, for a great colloquium presentation!

On Thursday, April 4th, we held our second student colloquium of the year featuring Devin Orchard’s paper, “The Capabilities Approach and Human Rights Inflation: Necessities and Complexities.” In the paper Devin laid out the capabilities approach as championed by Amartya Sen and Martha Nussbaum, which claims that human beings have a right to anything that is necessary to make one capable of pursuing human flourishing.  He then proceeded to describe why the approach entails the steady growth of human rights, i.e. “rights inflation,” laying out the various complexities and implications thereof. All in all, Devin’s paper made for a great philosophical discussion. Thank you, Devin, for sharing your outstanding work with us!

Our November 15 colloquium with Allison Rodriguez was a success. We had six students and three faculty members eating pizza and throwing around ideas for Allison’s very interesting argument on emergence theory. Allison argues that cultural meaning and folk psychology still hold such importance for our mental processes that our mental states cannot and should not be reduced to a reductionist approach of focusing solely on physical neurological processes. Her paper was enlightening and thought provoking, and the audience feedback and discussion enriched everyone’s understanding of the topic.

St. Olaf’s Beta Chapter kicked off its student colloquia series for Spring Semester this past Thursday with a presentation by senior member and President Patrick Behling. His paper sparked a lively discussion. Entitled, “Perceptive Virtue and Revelatory Rules: Making Sense of Contemporary Virtue Ethics and Divine Commands”, Behling aimed to reconcile divine command theory with the non-Christian principles of contemporary Virtue Ethics, mainly calling upon John McDowell, but also on Alasdair MacIntyre and R.M. Adams. Junior Emelia Carroll responded enthusiastically to his work, pointing out a few areas where Pat could say more to fill out his compelling argument. Others quickly joined in to help Pat refine his paper for future use. Among the attendees were PST members Bjorn Wastvedt, Miriam Brown, Dayna Jondal, and Wilder Welke. 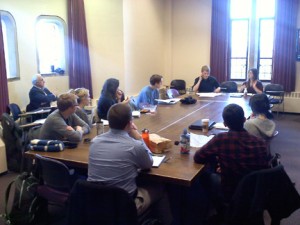