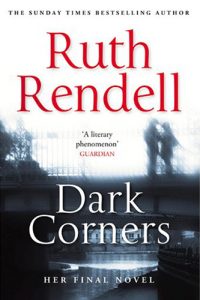 I first encountered the crime writer Ruth Rendell when I read her brilliant 1977 novel A Judgement in Stone, which begins with this famous first sentence: “Eunice Parchman killed the Coverdale family because she could not read or write.” What happens in that novel is, obviously, much more complicated than that, but at the end of the day it was the fact of her illiteracy that did indeed lead Eunice Parchman to commit murder. That’s what makes Rendell such a great writer: she peels away layer after layer of circumstance and character until you are left with the bare, pitiless fact.

Dark Corners, like A Judgement in Stone, begins ominously. Carl Martin inherited a house from his father, and in that house was a cupboard full of “alternative medicines, homeopathic remedies, and herbal pills.”  It would have been wise of Carl to throw those things out, but he didn’t. Here’s the end of paragraph two of the novel: “If he had known how it, or one particular item among all the rest, would change his life, transform it, ruin it, he would have emptied the lot into a plastic bag, carried the bag down the road, and dumped it in the big rubbish bin.”

A murder does occur in Dark Corners, and an attempted murder, and another death that you could fairly regard as murder, but it’s not really a crime novel. Instead, it’s the story of the gradual corruption of a man’s soul by guilt. That process is both painful and inexorable. Earlier I described Rendell’s vision as pitiless, and it is in Dark Corners too, but there are also moments were characters exhibit bravery, compassion, and the ability to become better people. At the very end of the novel, Carl Martin attains a measure of peace. So does the reader.