Hillbilly Elegy: A Memoir of a Family and Culture in Crisis. 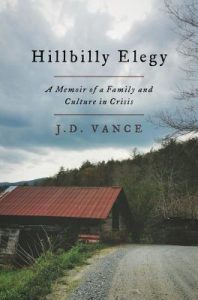 The results of our recent Presidential election have focused attention on a particular group of Americans: the white working class. One explanation for why President Trump won the election is that he recognized the extent to which white working class voters felt that they were being left behind in America, that the doors to prosperity and upward mobility were closed to them, and that he spoke to that anger and fear.  An excellent lecture by political scientist Justin Gest of George Mason University, sponsored recently by the Institute for Freedom and Community at St. Olaf, exemplifies this line of thinking.

Hillbilly Elegy is both a memoir and an argument for how to address the fears and concerns of the white working class. J. D. Vance grew up in Middletown, Ohio in a family that had emigrated from the coalfields of Kentucky.  The memoir is touching. Vance had a terrible childhood: his father abandoned him, his mother was an irresponsible parent, and he was effectively raised by his maternal grandparents, who themselves were in challenging circumstances. As a child Vance experienced all kinds of trauma, including abandonment, exposure to domestic violence, income insecurity, lack of stability in his living and family situation. He writes about his childhood and its effects on his later life with clear-eyed candor.

Vance’s narrative of his life includes an analysis of what caused it to be so rough, and that analysis produces a picture of not only what it is like to be poor but also what effects poverty has on individuals, families, and communities. He describes a hillbilly ethos — a code of honor and a set of commitments to place and family that sound great in the abstract but that also become self-defeating when they determine how you interact with the rest of the world outside your hillbilly community.

Vance was saved by the parenting of his grandparents and by other individuals in his life who put “a thumb on the scale,” as he expresses it, at the right time to help him move forward despite his circumstances. He enlisted in the Marine Corps after high school, graduated from Ohio State and Yale Law School, and now he is a principle in a Silicon Valley investment firm.

Vance describes himself as politically conservative. Mitch Daniels, former governor of Indiana and now President of Purdue University, is one of his heroes. Vance recognizes that public policy and government programs, such as the Pell Grants that enabled him to help pay for college, represented a “thumb on the scale” for him. And he does have suggestions for how policy and programs could be modified to be more helpful to persons like him.

But he also offers a very frank critique of the “hillbillies” among whom he was raised and who persist as a community today. He criticizes a quickness to blame the government for one’s personal faults, an unrealistic vision of one’s life (for example, a person who has received welfare his whole adult life complaining how poorly working people like him are treated), a failure to take responsibility for parenting children you have brought into the world, and so on.

In his concluding chapter he speaks directly to “hillbillies”:

Public policy can help, but there is no government that canfix these problems for us. (p. 255)

Not every reader will love Vance’s conclusions about how to address the problems that he describes so vividly in this book, but I think all readers will respond to his compelling memoir of his early life.