Sweet Caress. The Many Lives of Amory Clay. 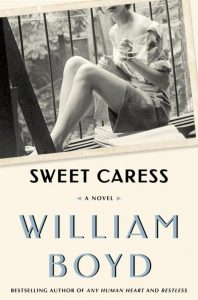 I first read William Boyd many years ago, when he published A Good Man in Africa, a very funny novel about a feckless British civil servant serving in a fictional country in west Africa. I was glad to be reintroduced to him when I saw Sweet Caress on the new book shelf in Rolvaag Library.

It’s the fictional autobiography of Amory Clay, a British photographer. Born in 1908, she grows up in a troubled middle-class family, her father a writer, her mother an unsympathetic presence (one of her favorite sayings to her daughter was, “Well, I guess you’ll just have to put it in your pipe and smoke it”). She discovers a passion for photography from her gay uncle, who gives her her first camera and shepherds her into a career as a photographer.  Her life is shaped in many ways by wars—WWI, WWII, Vietnam, both because of her own activities and because of the impact of the war on the people around her—her father, her brother, her husband, her lovers.

Amory Clay narrates the events of her life in a matter-of-fact way that belies how extraordinary they are. From the cottage in Scotland that she inhabits at the end of her life, Clay looks back on the arc of her life, interspersing accounts of her present-day activities as a seventy-year old woman with the various stages through which she passed as a younger woman. She was bold, brave, passionate, resourceful, and resilient.

She sees the world with a photographer’s eye. There is great attention to detail and a focus (so to speak) on moments captured in time, just as a camera captures them.

The novel’s epigraph—“However long your stay on this planet lasts, and whatever happens during it, the most important thing is that—from time to time—you feel life’s sweet caress—gives guidance on how to read it. So does its subtitle, “The many Lives of Amory Clay.” It may feel episodic as you read—here’s Amory as a young girl, here she is starting out as a society photographer, here she is in New York with her first real lover, here she is during the war years, and so on. You might compare it to looking at a series of photographs of a person’s life—first looking young and innocent, later a more adult mien, even later with some crow’s feet around the eyes but also some wisdom in them.

Many things happen to Amory Clay in this novel, and I wouldn’t say that life’s “caress” is always sweet for her, but she does find sweetness in the end. I encourage you to read this novel to find out how.