The Crime Writer: A Novel 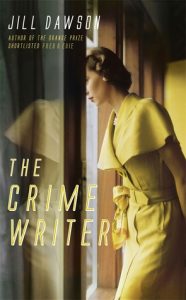 The Crime Writer begins with an unusual premise. It creates a fictional character based upon the real-life American writer of psychological thrillers, Patricia Highsmith (1921-1995), and then tells a story about her that places the fictional Highsmith in situations like the ones characters in her novels face. Essentially, Dawson makes another writer a character in that writer’s own world.

However, you don’t need to have read Patricia Highsmith’s twenty-two novels (I certainly haven’t) in order to enjoy The Crime Writer. It’s a straight-up psychological thriller. Patricia Highsmith (the fictional character) is an American writer of note who has come to live in a small village in England to work on a novel. She is in love with an English woman who is married to a man who abuses her emotionally and physically. The two women have to steal time on weekends and under pretense to be together. Their relationship is passionate, intense, and difficult.

In fact, Highsmith herself is a generally difficult person. An alcoholic, she shuns the company of most other people and most of all shuns attention from the press because of notoriety as a writer. An attractive younger woman makes her acquaintance and seems to be insinuating herself into Highsmith’s life for reasons that are unclear at first. So, a difficult person with at least two difficult relationships laced with sexual passion and blurred by alcohol, not to mention gender politics—what could go wrong?

Lots of things, and you will discover what they are when you read the novel, which probes and tests conventional notions of right and wrong. Dostoevsky’s Crime and Punishment is always playing in the background of The Crime Writer. What—if anything—justifies the taking of another life? What kind of personality even asks that question in the context of her intimate relationships?

Graham Greene called the writer Patricia Highsmith “the poet of apprehension.” There is a lot of that in this disturbing but compelling novel.