Students should wear nice clothes of their choice (no jeans, tennis shoes, or band uniforms please). We strongly urge participants to choose an outfit comfortable enough to wear all day. There simply isn’t enough time or space for changing before the concert.

The college wants to assure the safety of minors who visit our campus. Below is the link to the form we ask directors to complete for their student(s). Only one form is required per school. This form should be submitted to Sarah Gardner (gardners@stolaf.edu) prior to arriving on campus. Arthur Haecker is currently the Instructor of Trombone and Euphonium as well as the Director of the Norseman Band, at St. Olaf College in Northfield, MN. Prior to his appointment at St. Olaf Dr. Haecker served on the faculties of East Tennessee State University, Newberry College, and The National Music Conservatory in Amman, Jordan. He holds degrees from the Eastman School of Music, the University of Michigan, Winthrop University, and the University of Iowa. His private teachers include Mark Kellogg, David Jackson, and David Gier.

Dr. Haecker maintains an active performing and teaching schedule. He has been a featured soloist throughout the United Stated and the Middle East. An advocate of Arabic music and culture, Dr. Haecker has worked hard to introduce Arabic music to American audiences through performances and lectures. He has performed with the Amman Symphony Orchestra, Knoxville Symphony, Atlanta Pops Orchestra, the Brass Band of Appalachia, and the Illinois Symphony. He has also participated in the Hot Springs Music Festival, the Southern Illinois Music Festival, and the Brevard Music Festival.

As a conductor Dr. Haecker is passionate about wind music. He has been a guest conductor at the University of Massachusetts, Illinois State University, and Winthrop University. Additionally, he has done extensive research on Civil War brass bands and has presented his findings at conferences around the country.

Dr. Haecker is also the co-founder of Polymnia Music, a music publishing company dedicated to promoting young composers and arrangers. In his free time he enjoys cooking, playing tennis, and spending time with his wife Allyss, and his son Kai. 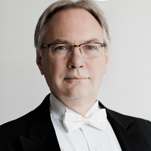 Timothy Mahr holds a B.M. degree in composition and a B.A. degree in music education from St. Olaf College and a master’s degree in trombone performance and a D.M.A. in instrumental conducting from the University of Iowa.

An internationally acclaimed composer, Dr. Mahr received the 1991 Ostwald Award in the ABA Band Composition Contest for his composition The Soaring Hawk. He was elected to the American Bandmasters Association in 1993. Formerly director of bands at the University of Minnesota-Duluth and founding conductor of the Twin Ports Wind Ensemble, Dr. Mahr is the principal conductor of the Minnesota Symphonic Winds and is active as a clinician and guest conductor nationally and internationally. Recent commissions have come from the United States Air Force Band, the Music Educators National Conference, and the American Bandmasters Association. Twenty-five of his works have been published, with many released on compact disc recordings and included on state contest lists.