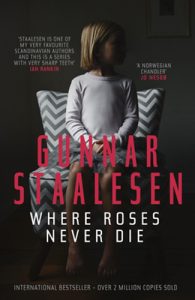 This book was the gift of my good friend Einar Vannebo, Director of the International Summer School at the University of Oslo. It was Einar who introduced me to Nordic Noir a decade ago, and all these years later I’m still reading and enjoying that genre.

The Norwegian detective novelist Jo Nesbø describes Gunnar Staalesen as “A Norwegian Chandler.” He’s referencing Raymond Chandler, the American author of such great hard-boiled detective novels as The Big Sleep. I can see why Nesbø makes that comparison.

A distinctive feature of Chandler’s prose is his frequent use of similes, so frequent that he is sometimes mocked for his reliance on them. Staalesen out-Chandlers Chandler. He apparently never met a simile he didn’t like. Here are some from pages 89-91 of Where Roses Never Die:

You get the idea. Staalesen, like Chandler, uses similes to establish atmosphere: cynicism, foreboding, world weariness. And like Chandler he approaches the point where they seem like a mannerism rather than contributing to the novel’s atmosphere.

The detectives in noir fiction frequently inhabit an ambiguous moral state. They operate in a world of broken people where the rules of civil society don’t apply, and their personal lives are often fraught with broken relationships, hostilities with the police, a sense of loss and despair. Staalesen’s detective, Varg Veum, fits the mold. As he says of himself, “My bank balance was catastrophic and my physical shape the worse I had been in since the 1960s. My moral state was even worse.”

Noir detectives are aware of the ambiguous moral state around them, and the burden of finding and the truth in a complex web of events and then passing judgment on what happened weighs on them. Other people notice it, too. One of the suspects Veum is interviewing says, “You give the impression of a hopelessly old-fashioned moralist.”

Part of Veum’s problem is his struggle with alcohol. Staalesen writes evocatively about addiction: “Then I lifted the aquavit glass and drank deeply. For a second or two I had to close my eyes. I was sailing into a harbor I had left much too long ago, and on the quay stood people I hadn’t seen for years, who received me with cheering so quiet that I could hear my pulse throbbing in my ears.” Or, “Then it was back to the bottle. One open and a second in prospect, until empties clinked wherever I turned, whether at home or in the office. I was the emperor of empties, and I had hundreds of vassals, empty, silent and glassy-eyed.”

I don’t want to give the impression that Staalesen is just a pale imitator of Raymond Chandler. Where Roses Never Die is a compelling novel, and Varg Veum is interesting and complex. How many other fictional hard-boiled detectives had a prior career as a child welfare worker?

See for yourself. You’ll enjoy both the novel and its noir atmosphere.