Ladies and Gentlemen, The Bronx is Burning

Ladies and Gentlemen, The Bronx is Burning: 1977, Baseball, Politics, and the Battle for the Soul of a City 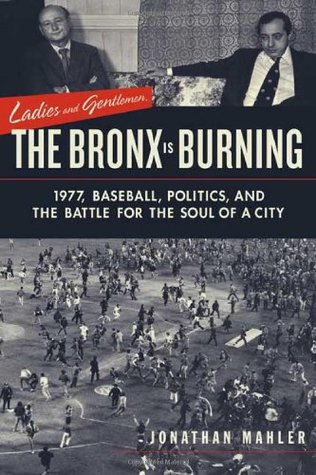 This is a book about things that happened in New York City during the year 1977. Think about it. If you were going to write such a book about a year in your hometown, or any city, what would your principle of selection be? Or to put it another way, through which lens or lenses would you present the year’s events?

Jonathan Mahler chose three lenses in Ladies and Gentlemen, The Bronx is Burning: the season that Reggie Jackson came to the Yankees, the Mayoral race, and devastating race riots that erupted after an electrical blackout. Why those three? Presumably because as his subtitle indicates they provide the best insight into what was really going on in New York that year. It wasn’t just those three topics, after all: 1977 also saw the search for the serial killer Son of Sam, Rupert Murdoch’s foray into American journalism with his purchase of The New York Post, and the opening of Studio 54 and the disco era. In which direction was New York going to go? Would it be a Yeats moment: “Things fall apart; the center cannot hold; /mere anarchy is loosed upon the world”? Or would the Yankees become winners again, would a successful mayor repair the City’s disastrous finances, and would racism, inequality, and injustice begin to be addressed?

Mahler does a masterful job of weaving the three main strands of his story together into a coherent narrative. He brings one strand along, then goes to another and then the third and then goes back to the first. It shouldn’t hold together, but it does.

This is a compelling read.