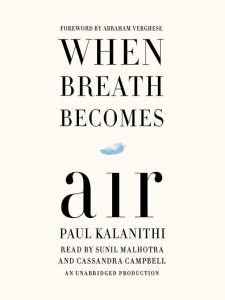 A good book is the best of gifts. This one was a gift from St. Olaf alumna Jane Western ’77, an adventurous and discriminating reader. It tells the story, written by himself and interrupted by his death, of a neurosurgeon poised for a brilliant career and a fulfilling life who died of lung cancer in his mid-30s. It’s a book about facing death — early, inexplicable, unfair death — by someone with a deep knowledge of the science of his disease and profound thoughts about identity and mortality.

Paul Kalanithi, an English major at Stanford, went on to earn an M.A. in English literature from Stanford and an M.Phil. in the history and philosophy of science from Cambridge. He sounds like a humanist, but he always lived at the intersection of the humanities and the sciences.  He also earned a B.A. in biology and graduated from Yale School of Medicine.

In the first half of this book Kalanithi charts the intellectual and spiritual journey that led an English major through medical school to neurosurgery. That journey is perhaps best understood, in Kalanithi’s own words, as happening at the place where “biology, morality, literature, and philosophy intersect.” There had to be some way, he thought, in which “the language of life as experienced — of passion, of hunger, of love — bore some relationship, however convoluted, to the language of neurons, digestive tracts, and heartbeats.”

Exploring that intersection led Kalanithi to neurosurgery because, again in his words, “neurosurgeons work in the crucible of identity: every operation on the brain is, by necessity, a manipulation of the substance of our selves.”

The second half of this book tells the story of how the author approached death. It is its own story, really, a contribution to the genre called ars moriendi, the art of dying. It is sad and inspiring. You could read this short and powerful book as a brave and thoughtful account by a mortally ill person, of his encounter with death. It is such a book.

But I think its real power lies in the meditation it offers on what makes us human, on how our bodies, our minds, and our spirit converge in what we call identity. How that happens is too big a question to answer in any one book, but the question abides and claims our attention. Kalanithi’s book helps us to begin to think about it.