Devil in the White City

Devil in the White City: Murder, Magic, and Madness at the Fair that Changed America Forever 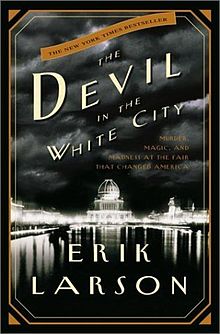 There are two stories being told in this fascinating and readable book: the story of the World’s Colombian Exposition, better known as the Chicago World’s Fair of 1893 (that’s the “magic” part), and the story of a serial murderer, one H. H Holmes, operating in Chicago at the same time (that’s the “murder” part). There’s also social history interweaved through these two narratives (that’s the “that changed America forever” part).

You might reasonably ask, “What links these two stories?” Erik Larson does that by positing that his book reveals two sides of Chicago in the Gilded Age: the White City and the Black City. The White City, which is what the Fairgrounds came to be called by visitors because all of the buildings were painted white, represented Chicago’s claim to a place among the world’s most important cities. Chicago had even beaten out New York as the site for the Fair, and it was determined to do better than Paris, the last city to host a World Exposition. Chicago was not just a city of hog butchers, polluted air, and sewage management issues. It was global in reach, home to the fine arts, to culture, to enlightened thinking, and it had the vision and energy and resources to put on the most impressive exhibition the world had ever seen.

The Black City represented a reality underneath that vision of Chicago, a reality marked by homelessness, poverty, exploitation, filth, violence and — most extremely — by a psychopath who murdered and dismembered young women without attracting the attention of the police.

The experience of reading this book, then, is one of going back and forth between these competing visions. In one chapter Daniel H. Burnham, chief architect of the Fair, is building it, magnificent piece by magnificent piece; in the next, H. H. Holmes is building a creepy murder factory to which he lured his victims and where he killed and buried them. In one chapter the leading men of Chicago are eating a meal that would choke a horse (see the menu on p. 98); in the next, thousands of unemployed are starving in the streets. The one story is uplifting; the other not so much, which is Larson’s point.

What I found most engaging in Devil in the White City was the account of how, against all odds, Burnham and his associates managed to pull off the Columbian Exposition. There is no reason he should have succeeded. There wasn’t enough time, there wasn’t enough money, the technology wasn’t there, and governance issues stymied him time and again. Larson quotes Burnham as saying, “Make no little plans; they have no magic to stir men’s blood.” He certainly lived that precept out and did a great thing.

The social history in the book is deeply interesting, too. You’ll know a lot more about the history of architecture in late 19th-century America than you do now if you read the book. You’ll discover the connections that Theodore Dreiser, Walt Disney, the inventor of the Ferris Wheel, and the famous landscape architect Frederick Law Olmstead had with the Fair. And you find out, from the list on p. 284 of the ailments that brought visitors to the Fair to its hospital, that people in the 1890s pretty much suffered from the same quotidian ailments that we suffer from today (diarrhea was the number one cause; constipation the second).

This book is interesting, informative, fun, and readable.