The Price You Pay 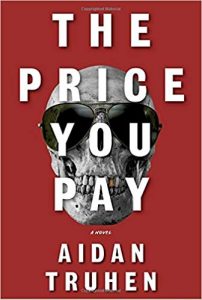 I found this novel on the “recent fiction” shelves in Rolvaag Library. It was a wild ride. Everyone should probably read a novel like this once in their life, but probably not more than once.

Jack Price, a cocaine dealer in New York, narrates it. One day his downstairs neighbor in the apartment building, a mean elderly woman he doesn’t even like, is brutally murdered. It’s a personal affront to him because it happened in his house, so to speak. He makes inquiries. To discourage him from doing that, a bunch of thugs break into his apartment and beat him savagely. If you think killing his neighbor made Jack Price mad, you should see how he feels about the beating. It turns out it was ordered by the rulers of criminal underworld, the Seven Demons. Nobody messes with the Seven Demons. But on the other hand nobody messes with Jack Price. This novel tells what happens. Think James Bond versus SPECTRE.

A reviewer in the German magazine Der Spiegel called The Price You Pay “Reminiscent of James Joyce and South Park at the same time.” He also compares first-time novelist Aidan Truhen to Bret Easton Ellis (for the cynicism) and to Don Winslow (for the pacing.) These comparisons all make sense (but lean lightly on the similarities to Joyce), and I don’t know many other novelists about whom you could say that.

To give you a flavor of the atmosphere in this novel, here is the narrator’s commentary on the Disney film Finding Nemo.

Two thousand children get eaten with their mother in the first
scene and then their father who has appalling PTSD goes looking
for the last kid he has left in a trek through this cannibalistic
wilderness in the company of a dementia-suffering love interest
and everyone laughs at them for ninety minutes. It is the darkest
most fucked up thing I have ever seen in my entire life.

You get the picture.

If you pick up the book be prepared for a preposterous plot, lots of gory violence, lots of vulgar language, a level of energy that pushes you back against your chair, and lots of cynicism (like that in the assessment of Finding Nemo) that you really should deplore but you find yourself laughing at instead.  But probably don’t look for any great life lessons.