The Middle Man: A Novel 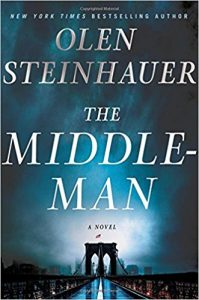 This is another book I came upon while browsing the new fiction shelf at Rolvaag library. It’s a great resource! I hadn’t heard of, or read anything by, Olen Steinhauer, but I was intrigued by the plot summary on the book jacket flap and by the blurb from Stephen King, who called one of Steinhauer’s earlier novels, The Tourist, “The best spy novel I’ve ever read that wasn’t written by John le Carré.” Stephen King didn’t steer me wrong.

The Middleman is set in contemporary America, post the election of President Trump, post recent controversy about the FBI, and post street protest against various policies the government is pursuing. The America of The Middleman looks very much like America today, with bitter disputes between progressives and establishment figures and between advocates for wide-ranging social change and advocates for more conservative approaches.

Into this environment steps FBI Special Agent Rachel Proulx. (I wonder how you pronounce her last name, by the way.) She has been monitoring on the west coast a particular movement called the Massive Brigade which is advocating violence to accelerate the pace of social change. The more she learns about the Massive Brigade, and the more she leads the Bureau into engagement with its members, the more confusing and dangerous it gets. As she uncovers unlikely alliances, murky motives, and dangerous lies, Proulx gets drawn deeper and deeper into Bureau intrigue.

I started this book on a Saturday morning and read the whole thing that day. It’s that hard to put down.