Read Me: A Novel 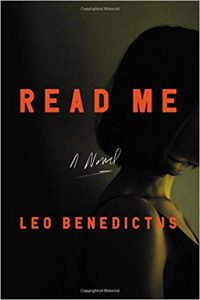 This is a terrible, creepy book.  Its narrator stalks young women, his “subjects.” He fixates on one, uses information he gained by putting microphones and cameras in her apartment to upend her life. In the course of doing that, he murders two innocent people who happen to be involved with her, one by drugging, torturing, murdering, and dismembering him, an act described in way too much detail. He’s about to murder his subject, too, when the book, thankfully, ends.

The author is an accomplished prose writer, but why would you create this character or write this story?

The press that published this novel, called Twelve (and who names a press after a number?), has a “Mission Statement” at the end of this novel. It reads, in part, “Twelve strives to publish singular books by authors who have unique perspectives and compelling authority. This book certainly offers a unique perspective, but it would have been better not shared with the reading public.