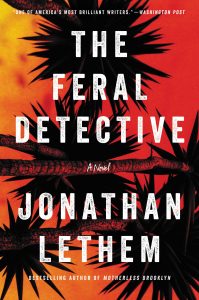 The Feral Detective is a fictional response to the last presidential election.

Its first-person narrator, Phoebe Siegler, has quit her job at The New York Times because she’s angry with her editors for not being harder on the newly elected President Trump, whom she refers to as “the Beast-Elect” and the “Monster in the Tower.” She’s angry about a lot of other stuff too, mostly in a “here’s how mad I am and how foul-mouthed I can be about it” way rather than a “here’s what I’m going to do about it” way. She’s not very likeable.

But maybe Lethem doesn’t intend her to be, at least at first. In any event, with time on her hands now that she’s quit her job, she travels from New York to California to search for her friend Roslyn’s daughter, Arabella, who has gone missing from college. She may have gone to California. A social worker there suggests that Phoebe enlist the help of Charles Heist, who has some expertise in finding missing persons. He’s the Feral Detective.

What makes him feral? Like so many detectives in the noir tradition he is a solo practitioner, disdains the social graces, speaks in gnomic utterances, and operates with what is clearly his own moral code, the tenets of which are hard to discern from the outside. He is feral, we learn as the novel progresses, because he was brought up in a remote California desert area by a band of men, though he defects at one point in his childhood to a band of women nearby. He’s the child who was raised by wolves, though in this case the wolves are a bunch of hippies, ex-cons, motorcycle riders, and other questers.

Like so many quest novels, Phoebe’s journey is really one of self-discovery, though they do find and rescue Arabella. She’s not as unlikeable by the end of the novel, but she’s still angry.

This novel has been greeted with both praise and disappointment. The Washington Post argues that “The Feral Detective is one of [Lethem’s] nimblest novels, a plucky voyage into the traumatized soul of the Trump era,” asking the question “Who can really be saved in our collapsing society?” Of Phoebe, the narrator, the Post says, “She’s sharp and sassy and always willing to confess her own contradictory feelings, which sway erratically from lust to terror.”

The New Yorker, on the other hand, takes a different view, calling The Feral Detective “a ridiculous book.” Of Charles Heist, the eponymous detective, it says that he “never lives on the page—he’s a thousand-mile stare, a leather jacket.” Of Phoebe, the narrator, The New Yorker says, “Lethem’s strategy for writing an “authentic” woman appears to consist mostly of emphasizing her sexuality.” In sum, “The book suggests that men writ large are dangerous and atavistic (“stuck in the past”), whereas women writ large are flibbertigibbet clowns for whom nothing is sacred—more of a step sideways from Trumpism than a step forward.”

I wouldn’t call this a ridiculous book, but I responded to it more along the lines of The New Yorker rather than the Post. Perhaps it would have been better for Lethem to process his reaction to the election longer before turning it into fiction.