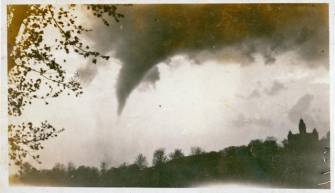 A Twisty Tale from St. Olaf’s Past
By Cate Redman
On May 25, 1920, the eye-catching headline, “St. Olaf Dodged by Ravaging Tornadoes,” ran front page in the Manitou Messenger following one of the worst tornadoes to ever hit Northfield. The sub-title read, “Spared apparently by a miracle.” Gertrude Hilleboe, then Dean of Women, recalled watching a baseball game on what is now Mellby lawn,

I was watching from the west door of Mohn Hall, heard a terrific roar and saw a funnel cloud coming slowly over the valley with boards and branches whirling in its vortex, seemingly aiming straight for the grandstand. What should I do? Run over and tell the students to get out of the stand and throw themselves flat on the ground? But there wasn’t time for this.

Fortunately for the Oles present, the funnel cloud divided into two twisters, with one veering sharply to the south to eventually tear up a third of nearby Castle Rock. The other twister passed over St. Olaf and in front of Old Main before disappearing.

The 1920 storm was not the only tornado to hit Northfield in the ’20s. Just two years later, a similar storm following a path only a mile to the east approached the Hill. The second storm was so similar that for Gertrude Hilleboe, it became wound into one windy remembrance.  Unlike its earlier counterpart, Oles were able to witness the later twister’s approach for miles. A long-term resident of Northfield, Hugh Drentlaw, recalled:

I could hear a noise like that of a freight train and I thought that was exactly what I was hearing until it became louder and louder and I could finally see the cloud [along with] boards flying through the air.

As the storm approached Manitou Heights from the west, a funnel cloud descended, narrowly swerving around St. Olaf. Unlike the campus, the rest of Northfield did not escape the storm entirely unscathed. The wind overturned an intercity bus on the corner of Lincoln and Greenvale, just to the northeast of campus. The driver saw the funnel as he approached the hill, and sought refuge on Lincoln, only to be caught directly in the storm’s path: theNorthfield Independent reported, “had he stopped 150 feet away, he would have escaped the blast.” As it was, he and his lone passenger “were not injured but suffered quite a shake up and a scare.”

A St. Olaf faculty member, Dean Henry M. Thompson, lost a barn located behind his house on St. Olaf Avenue, which was then home to his prize-winning Barred Rock chickens. As Drentlaw recalled, “the storm spun the little building around, the corners in turn dragging in the dirt, then finally the total building lifting high into the air and ‘exploding’ at about 100 feet.”

Still, Manitou Heights was blessed to escape the storm’s fury, although the tornado’s skirting of the hill might not have seemed quite as miraculous for several Ole women who went scurrying after their sheets:

At Mohn Hall, a large number of girls had pushed their beds out onto the porch as it had been very hot weather and too warm to sleep inside. The tornado peeled the bedding and in some cases, the mattresses, off the beds and left them scattered over the campus.

Still, Manitou Heights was blessed to escape the storm’s fury. Although the “St. Olaf Bubble” is a point of frequent grumblings for students, at least it keeps the twisters away and the bedding on campus grounds.
—————————————————————————-
For Gertrude Hilleboe’s account of the storms, check out “Tornado Visits the Campus.”

Photo credit:
Gerhard Mathre ’23 worked in a photography shop in town and happened to be returning to the hill along St. Olaf Avenue when the tornado arose. This picture appeared in the local papers, and several copies made it into 1920s student scrapbooks. This copy is from the scrapbook of Esther (Halsor) Haase ’24.