Tidbit: It All Comes out in the Wash

Recently on the Today Show, a family was asked to give up their modern conveniences for one week. The mother of 4 children said going without a washer and a dryer was the most difficult.

The mother’s comments started me thinking about washday blues over the years on the Hill. Imagine instead of 4 children, a student body in the hundreds with few services provided on site in the college’s earlier years.

In the 1890s, Prof. Halvor Ytterboe cautioned students in his talk on etiquette and behavior, by stating:

Do not wear collars and shirts so dirty that one is tempted to plant and raise a crop of potatoes or take a homestead on.

Be sure to pay your wash bills. One of the cheapest and smallest and meanest things I know of is for one to run away from his wash bills. A poor washerwoman!

By 1914, it appeared students faced laundry hardship. In a letter to his parents, Adolph Ensrud ’17 wrote:

I think I will send a bundle of laundry home this week. They wash so poor here that they ruin everything. Over half the students send their laundry home. When I worked in the post office we handled 30 to 50 pieces a day and the most of it was laundry.

The practice of sending laundry home gained such momentum that by 1929 The Messengernoted that most “every student at St. Olaf and Carleton knows that a laundry case will carry his laundry home and back again, with perhaps a bit of goodies to eat on the return journey.” The Mess also noted that on average, the Northfield post office handled 575 packages a week. Of these, 300 to 400 were laundry cases. Northfield laundry services feeling the pinch, hired students to act as agents and manage a campus laundry service.

In the midst of a coal strike in 1946, a freight embargo edict caused much consternation with students: laundry cases could not weigh more than 5 pounds. Students found this a hardship as they were used to stuffing their cases to capacity, averaging 15 pounds.

The practice of sending laundry cases home dissipated in the late 1950s when new dormitories were constructed, equipped with “modern” washers and dryers. Joanne Tapper ’59, complained in The Mess that the East Hall (later renamed Flaten Hall) washer and dryer worked together—”one rips, the other burns.” Tapper also cited that the washer was obsessed with cleanliness with a “driving compulsion to have the floor scrubbed, flips a gismo deep within its innards, and covers the hallway with water and soapsuds.”

A few years later, women from Hilleboe-Kittelsby protested the cost of dorm laundry facilities by washing their clothing at Heath Creek. 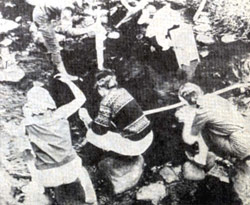 The mother of the family on the Today Show didn’t have to wash clothes in the creek, however she came close—doing 16 loads of laundry in the bathtub. Perhaps she needed an Ole laundry agent.