Tidbit: Let there be light!

Today we commemorate Founders’ Day, which marks the signing of the Articles of Incorporation on November 6, 1874. Over the years, Founders’ Day celebrations have included building dedications, honorary degrees, and tributes to St. Olaf College’s past. One particular Founders’ Day [or Foundation Day as it was called then], exactly 100 years ago, the electric dynamo was installed to supply light to the campus. 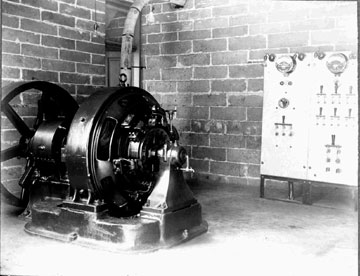 With the turn of the last century, the College was looking forward to expanding the campus with several building projects in mind (Old Ytterboe Hall, 1900; Manitou Cottage, 1900; Steensland Hall, 1902; Central Power Plant, 1905; and Hoyme Memorial Chapel, 1906). As early as the fall of 1901, the Northfield Light Heat & Power Co. completed the work of wiring the Men’s Dormitory (Old Ytterboe Hall).

By 1905, the power plant, equipped with a high-speed dynamo, was under construction below present-day Holland Hall. The Northfield News praised the facility as representing the “highest perfection of dynamo and engine building of today.. The plant is giving entire satisfaction and is capable of running six hundred sixteen candle power lamps.” Sustainability [this year’s campus theme] was practiced then, as the College would supply its own heat and electricity.

P.M. Glasoe, who succeeded Prof. H.T. Ytterboe as college treasurer, wanted to try the new lights-for the first time on Founders’ Day. The electricians, according to the Northfield News , “had been working industriously all day.”

Others were working hard too that day, particularly Mrs. Elise Ytterboe, head of the Boarding Club. It was her responsibility to serve supper to nearly 500 visitors, faculty, and outside boarders in the Boarding Club dining room located in Old Ytterboe Hall’s basement. Her recollection of that evening has been cited several times in various historical accounts, but a recent “discovery” in the Agnes Kittelsby papers (NAHA Archives, correspondence from Elise Ytterboe to Agnes Kittelsby) provides a more accurate reflection of the “oyster supper” as it has become known to historians.

We did not make much extra for dinner but set the time for supper at 5 o’clock as we were to serve two settings
and then was to be an informal reception from 4 to 7:30 when the illumination began [lighting the windows of Old Main with candles, a practice from 1878 to 1923]. We were to serve supper to visitors, faculty, outside boarders and all in place of the usual ice cream. The bill of fare was to be plain and not extravagant.

The dining room was decorated in old gold and white, napkins to match, and yellow chrysanthemums on the tables. It looked quite pretty.

We were to serve at 5:00 as I said. I looked at the oysters, they were doneand so was the coffee. I was going to start serving when lo and behold no lights. Glasoe wanted to try the new lights — for the first time (we had city lights before. Now we were to have our own which had not been tried before) — we waited and waited — the crowd got nervous and the students noisy in the halls as bits of plastering began to drop in the dining room.

You should have seen the place when the lights finally came on at 6:15. Imagine the oysters done over an hour too long and the coffee ditto — somehow I did not care so much as all knew it was not my fault. If the lights had been on we could have served like 1-2-3 — anyway I had every one served before 8 o’clock. They went to the illumination.

Same evening for the first time we had light from the current made by the dynamo up here. The globes all over the building were exchanged for the new ones, as the current is now much stronger and would burn out the old ones. They are not so stingy with the light now. Just think, in the hall and cross halls of the first floor, also including the entrances, there are no less than twelve lights.

Of course there is no way to tell if Mr. Rowberg was one of the students that Elise Ytterboe cited as being “noisy in the halls” or contributing to the fallout of “bits of plastering” in the dining room. What will mostly be remembered from the anxious evening a century ago is the step forward St. Olaf took in “taking care of itself.” A writer for the Manitou Messengeraptly noted at that time, “This is without a doubt a very wise and economical plan. Judging from recent changes and developments, we venture to predict that within a few years Manitou Heights will be transformed into a little city.”