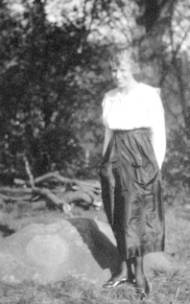 (Outside Tomson)
Nearly a century ago, Georgina Rostad, posed for a picture standing next to the St. Olaf Rock. From Rostad’s time to the present, countless people have done the same. The imposing granite boulder, however silent, has played a small part in Manitou Heights’ history.

Originally the rock was mostly buried, and located in the woods (present day Science Center) on the brow of the hill of Norway Valley. In the summer of 1897, N. Edward Mohn, the eldest son of Pres. Th. N. Mohn, took it upon himself to carve what is believed to be the first representation of the college seal.  At age 20, young Mohn tested his skills as an artist using one chisel.

His brother Sigvard (Ted) recounted the chisel soon became “blunted and needed to be sharpened. After sharpening, it should have been tempered, but Edward had no means of tempering steel. Before he finished, the cutting edge of the chisel became as soft as malleable iron. For this reason the seal was not cut as deeply as Ed would have liked.”

The Manitou Messenger failed to notice Mohn’s accomplishment in the fall of 1897. Upon graduation in 1899, the Messenger cited Edward’s chiseled rock as well as his other accomplishments, including serving as class president, and member of the St. Olaf Band. He was also engaged as an instructor of drawing in his senior year.

Noted as an architectural designer in Minnesota, Mohn worked in the state architect’s office in St. Paul from 1911-1919. After 1919, Mohn was independently engaged in his profession until his death in 1943, specializing in church architecture.

Noted as an architectural designer in Minnesota, Mohn worked in the state architect’s office in St. Paul from 1911-1919. After 1919, Mohn was independently engaged in his profession until his death in 1943, specializing in church architecture.

He was hired in 1919 by St. Olaf College to design the Women’s Gymnasium (Speech-Theater Building built in 1920). Incidentally, architectural historians are familiar whit Mohn as he designed an innovative way to handle parking, highways and entry to out cities in the late 1920s.

When excavations began for the Science Center in 1967, the St. Olaf Rock was unearthed and moved to its present site in 1968. Few people could have guessed the enormity of the boulder scooped out of the ground. 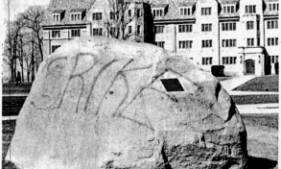 In April 1972, someone armed with a can of red spray paint and strong anti-Vietnam emotion, misspelled “Strike” on the rock’s face, instead proclaiming “Srike!” for peace. Records do not indicate how or when the paint was removed.

Since 1972, the rock has returned as a photo prop. I also recently witnessed it to be a challenging climb to visiting children. I listened to their laughter as they slowly made their way to the top of the rock with some assistance from their parents. The hymn, “Built on a Rock” came to mind, and I felt comforted knowing the future of the Hill will endure.