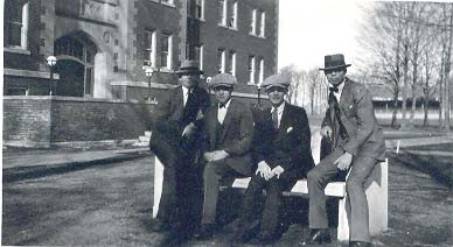 In 1957, the Manitou Messenger deemed the marble bench in front of the Science Center (removed since 2011) to be one of the seven wonders of St. Olaf College (joining Ytterboe the Dog and the Ole Fugleskjel monument among others). Fifty years later, the marble bench is still a wonder to many passers-by. To this day I have rarely witnessed anyone actually sitting on its cold, smooth surface.

Donated by the class of 1920 at an expense of $1,000 (roughly $11,200 today), the marble used was the best available and weighs one ton. The college seal is carved on each end, while the back is adorned with carvings of the St. Olaf monogram. The bench was conceived as an allusion to Nestor, the oldest, wisest, and most experienced of the Greek chiefs. The reference is in Homer’s Odyssey: “…Up from his bed rose the horseman, Nestor of Gerenia, and went forth and sat down on the polished stones which were before his lofty doors, white and glistening as with oil…”

Placed strategically in front of Old Mohn Hall, the ornamental bench, would prove a slight hazard to any budding relationship as Rolf Fjelstad ’29 pointed out in his musical skit, “The Marble Bench” (1929):

Young lovers, Gloria and Bernie, meet in front of Mohn Hall and Gloria inquires why they cannot sit on the bench. He replies, “…nobody ever sits on it. It’s a tradition.” Bernie added, “I think they wanted to make it a sort of trysting place, but some old square heads wouldn’t stand for it and so they put the poor old Bench right square outside the window of the Dean of Women [Ms. Gertrude Hilleboe].”

Alumni will attest that Dean Hilleboe kept a close eye on her “girls” as well as most matters that concerned Manitou Heights. As with the St. Olaf Rock (September’s Tidbit), the construction of the Science Center in 1967 affected the bench. Hilleboe had retired and her watchful eye could not stop what was about to happen. The second to last line of the poem (see above) “Forever unmolested be,” held true for 47 years. But in 1967, the bench was removed to, or I should say deposited in, the weeds, near the college maintenance buildings south of the campus where it remained undetected for the next 22 years. 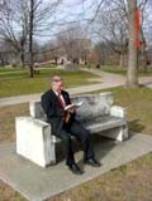 In 1989, Prof. Howard Hong ’34 and Norman Madson, staff architect, uncovered the bench, had it cleaned and reconstructed near its original location. The Saint Olaf Magazine noted, “But the gift was not put into place without a proper ceremony. … Jim May, professor of classics, and six classics majors gathered around the bench and read the appropriate passage from Homer in both Greek and English.”
If you find yourself between a rock and hard place, take a seat on the marble bench, relax and read some Homer.

Dean Jim May taking a break with Homer.  St. Olaf Rock in background.