In the summer of 1932, Arnold Flaten ’22 returned to campus after studying art in Europe for two years. Charged with creating an art department and supported by a generous gift of $5,000 from the Carnegie Corporation to the College, Flaten designed and assisted in building an art studio based on a Norwegian “stabur” or storehouse. The exterior, finished entirely of wood, was stained with creosote, giving it the appearance of old-country buildings. It was decided in 2007 to remove the building from its original location near Old Main to make way for the construction of Regents Hall of Natural and Mathematical Sciences.

In anticipation of the dedication of the reconstructed Flaten Art Barn on Thursday, Nov. 7, 2013, in the Chapel at 11 a.m., I took a few minutes and journeyed down a short gravel road to Windy Lane (yes, I’m serious), which leads to the Art Barn and wind turbine. Adjacent to the natural lands and hiking trails, the new building site provides an immediate contemplative opportunity.

Upon a Closer Look

The caw…caw…caw of a crow sounded as I gazed at the vista of faded autumn leaves clinging to the maples, basswoods and ashes. A swath of corn, nearly ready for harvesting, rustled in a strong, chilly breeze. Brown leaves crunched underfoot and the trim of the Flaten Art Barn’s copper sheeting glinted in the afternoon light. I was certainly not the first to survey this new structure as the tracks of a raccoon remained in the dried mud.

As I stood under the Art Barn’s small entryway or “dragon portal” (notice the beast carved on the roof line), I was amused by the use of the Kerr self-sealing mason jars for light fixtures. The two front wooden pilasters, saved from the original structure, are adorned with carvings of heads—two on each—crafted by Arnold Flaten between 1932 and 1936. On the left side of the entryway are found a Viking and a Native American; on the right side a bearded immigrant pastor, Hans Nielsen Hauge, and a youthful student, Jarle B. Leirfallom (a magna cum laude member of the Class 1936 and a 1954 recipient of the St. Olaf Distinguished Alumni award), welcome visitors.

A certain beauty can be found in solitude, especially on a campus with three thousand plus students, faculty and staff. The eyes of the Leirfallom carving have a meditative quality, reflecting the artist, but also the student’s personality. David Flaten, commenting on his father’s creations, said, “Most of my father’s art came out of his meditation.” Quoting his father, he added, “ ‘Leaving your art is a record of what you loved in life.’ ” Only the rhythmic whoosh, every second or two, of the giant wind turbine’s blades kept me company.

Leirfallom, a student body president and all-conference football tackle, was a lifelong outdoor enthusiast and proponent of healthy living. After graduation he earned a master’s degrees in social work and public administration and later served as director of the Minnesota Public Welfare Commission from 1944-1955. In 1967, Leirfallom was appointed conservation commissioner by Gov. Harold LeVander, heading the agency for the next four years that later would become the Department of Natural Resources. Sadly, Leirfallom passed away in 1997 due to Alzheimer’s disease, from which he suffered for 11 years.

As the wind gusts increased and the blue spruces swayed at the entryway to Windy Lane, three students, undeterred by the weather, jogged by on the neighboring path. A slight mist added to my shivering, encouraging me to head home longing for a few days more of the dragon’s warm breath of summer. 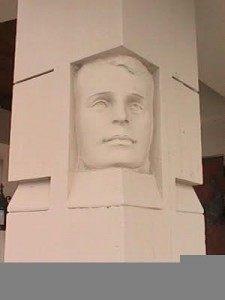 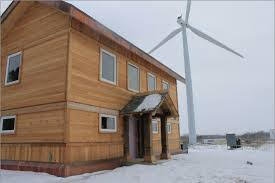