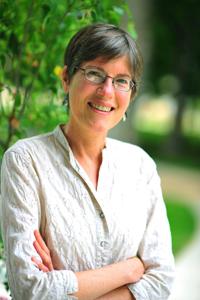 Marci Sortor, provost and dean of the college and professor of history, joined St. Olaf College in 2011. After receiving a Ph.D. from the University of California-San Diego in 1988, she held a teaching and research fellowship at Stanford University. She moved to the Midwest in 1989 to join the history faculty at Grinnell College, where she served for 21 years in various capacities, including as professor of history, associate dean of the college, vice president of institutional planning, and interim vice president for college and alumni relations. As provost and dean of the college of St. Olaf, she oversees the academic division of the college, including Libraries and IT;Government, Foundations and Corporate Relations; Advising and Academic Support; the Registrar; International and Off-campus Studies; and a variety of TRIO programs. Her tenure as provost and dean of the college has entailed the revision of the general education curriculum, To Include is To Excel and Digital Humanities on the Hill (major projects funded by the Andrew Mellon-funded), and serving as the inaugural chair for the college’s Council on Equity and Inclusion.

A student of medieval history, Sortor has taught courses on Europe from the Middle Ages to the 21st century. Her research takes her to northern France and Belgium, and she has given presentations and published on the economic history of northern European cities, medieval market systems, and immigrants in 15th-century cities.

Some of Sortor’s publications include “The Business of Business in the Middle Ages,” “The Measure of Success: Evidence for Immigrant Networks in the Southern Low Countries, Saint-Omer 1413–1455,” “The Ieperleet Affair: The Struggle for Market Position in Late Medieval Flanders,” and “Saint-Omer and Its Textile Trades in the Late Middle Ages: A Contribution to the ‘Proto-Industrialization’ Debate.” She has also co-edited with Stanley Chodorow two editions of The Other Side of Western Civilization, Vol. 1, a collection of readings on European popular culture from antiquity through the Reformation. Her research project, “Work, Business, and Investments: Economic Networks in a Fifteenth-Century City,” entails exploring the intersection of social networks and profitable connections for medieval city dwellers. Most recently, Sortor has presented and co-led workshops on the topics of interdisciplinary teaching, learning, and learning spaces.

Learn more about Provost Sortor by viewing her curriculum vitae.

Provost and Dean of the College