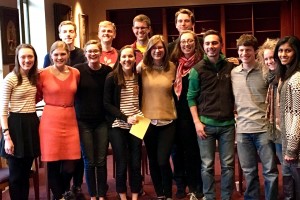 The national honor society for the study of religion and theology was founded in 1976 at Manhattan College in New York City. It has grown in recent years to include 180 chapters at colleges and universities across the country.

The society was formed to further the study of religion and theology at academic institutions and to encourage excellence in learning, teaching and research in these fields. The Greek letters in its name stand for Theos – Anthropos – Koinonia to signify three primary areas of concern in the study of religion (God – Humanity -Community). The society also publishes an academic journal to which initiated students and faculty may submit articles for possible publication. There is an annual prize for the best published student article.

Theta Alpha Kappa is primarily an honor society, which recognizes by initiation those students who have done outstanding work in their course work as undergraduate students. At many institutions it also serves as a student-run organization, which plans activities to promote a greater sense of community among those who share an interest in the study of religion

The Alpha Delta Kappa (St. Olaf College) chapter was approved in February 1998, so this is still a relatively new society. It is hoped that those elected today will play an important role in continuing to develop this organization on our campus.

Membership is open to majors and non-majors of Religion