Lars W. Boe (1875-1942) is a commanding figure in the histories of St. Olaf College and of American Lutheranism. Son of a pioneer pastor, Boe graduated from St. Olaf in 1898, and he was ordained after attending the United Lutheran Church seminary in St. Paul. Still in his twenties, he became the first president of Waldorf College (1904-15), where he also served as pastor and in the state legislature. Turning to church administration, Boe became executive secretary to the trustees and education board of the newly created Norwegian Lutheran Church of America in 1917.

Boe’s 1918 inauguration as St. Olaf president visually emphasized his succession to the work of his predecessors, combining Norwegian-American tradition with the patriotism of a nation at war. He would lead the college through prosperity and depression into the upheavals of another World War.

Bold in vision and personality, Boe dedicated himself to a “Greater St. Olaf” with a national reputation, enhanced academic stature, and a first-rate faculty that included Ole Rolvaag and F. Melius Christiansen. As the student body grew from 600 to 1100 students, “Prexy” Boe remained a paterfamilias. His construction program still marks the campus. Its distinctive Norman Gothic style found an epitome in the building eventually named for Boe’s friend, treasurer, and onetime Northfield mayor, P. O. Holland. Boe’s international interests placed him on the committee of the Lutheran World Convention, took him to Europe regularly, and brought Crown Prince Olav to Northfield in 1939. Boe also provided leadership to the Norwegian-American Historical Association and to the Council of Minnesota Colleges. 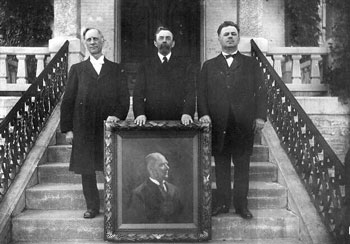