A noted Reformation historian, Mark U. Edwards, Jr., came to St. Olaf from the Harvard University Divinity School. Born in California, he completed his undergraduate and graduate degrees at Stanford and taught at Wellesley and Purdue. Edwards also served for several years on the board of sister school Wittenberg College.

President Edwards’s interest in Christianity and the environment became the theme of a week of symposia that preceded his inauguration. The college’s goal of promoting a global perspective was represented by the massed platform flags. Mark and Linda Edwards were joined by family members for the inauguration. The college’s historic ties to Norway were confirmed in the 1995 visit of King Harald V and Queen Sonja, and ties to the Northfield and larger Minnesota communities were affirmed by such mayoral visitors as Paul Hager and Norm Coleman.

The Edwards presidency was a period of numerous completions and initiatives. The Buntrock Commons was constructed, and the Paracollege educational experience was concluded. Long-range planning initiatives extended from a new staffing plan to campus development. The Fram! Fram! Forward St. Olaf campaign was launched with a goal of $125 million, and a diversity initiative was introduced. A new college statement about Identity and Mission for the 21st Century was adopted. The 125th anniversary was celebrated in many ways, including a national conference for representatives of church-related institutions. President Edwards’s environmental interests guided the preparation of cooperative land-use ideas with the Northfield community, including a proposal for a new hospital site. 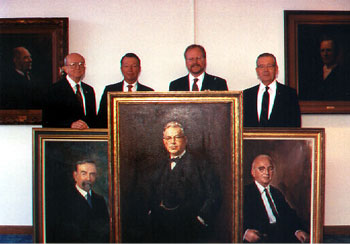