A native of South Dakota, Harlan Foss (1918-1995) was the only St. Olaf president to come from the ranks of its faculty. He and his wife Beatrice Lindaas Foss were members of the St. Olaf class of 1940. President Foss also attended Luther Theological Seminary and completed his M.A. and Ph.D. degrees at Princeton Theological Seminary and Drew University. He served as a parish pastor in Milwaukee and was called by President Granskou to join the St. Olaf religion department in 1947.

Before becoming president, Dr. Foss provided thirty years of teaching and leadership to the college and to the Northfield community. At St. Olaf, he was a long-time chair of the religion department, of the social studies division and the history, philosophy and religion division, and of the curriculum and educational policies committee. In Northfield, he served on the school board for seven years, was a member of the community development committee, and participated in the Lions and Rotary clubs.

Rev. David W. Preus, President of the American Lutheran Church, officiated at Dr. Foss’s inauguration. His presidency was marked by his continuing pastoral care for students, with whom he interacted in a variety of ways, including his example on “Energy Day” in 1980. During his presidency, the St. Olaf international studies program was broadened through a faculty exchange agreement with the East China Normal University in Shanghai, the implementation of which included a gift of Chinese art to the college. Under President Foss, St. Olaf also achieved both the highest level of giving in its history and increased recognition as a national liberal arts college. 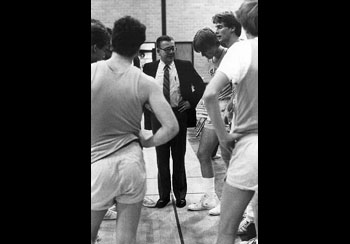