Born in Washington, D.C., Melvin George obtained a Ph.D. in mathematics from Princeton University. An active Lutheran layman, he was the first president of the college not to be an ordained member of the clergy. President George came to St. Olaf from the University of Missouri, where he had served as professor of mathematics, vice president for academic affairs, and interim president. His wife Meta George has roots in Red Wing, Minnesota.

Prior to his inauguration, President George accepted the invitation of a group of freshman students to reside with them for a week in Mohn Hall, the dormitory named for the college’s first president. Rev. David W. Preus, Presiding Bishop of the American Lutheran Church, was present for his inaugural ceremony. President George’s inauguration was also noteworthy for its re-creation of the 1918 photograph of living and deceased St. Olaf presidents.

Notable accomplishments of the George presidency included the completion of the VISION capital campaign, the tripling of the college’s endowment, the introduction of a new general education curriculum, and the construction of a major library addition and a new dormitory (Manitou Hall, subsequently Ytterboe Hall). Significant visitors during the George presidency included Bishop Andreas Aarflot, the Primate of Norway. Retaining his interest in public higher education during his St. Olaf years, President George also served as head of the Regent Candidate Advisory Council for the University of Minnesota. 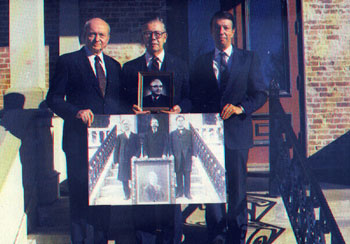