Clemens M. Granskou (1895-1977) personified the college’s early ties to Lutheran missionary fields, connections from which its emphasis upon a “global perspective” would eventually develop. A native of South Dakota, Granskou graduated from St. Olaf in 1917 and from Luther Seminary in 1921, after service in the First World War. He and his wife Ella were missionaries in the Honan province of China from 1921 to 1925, after which Granskou was superintendent of the American School in Honan for two additional years.

After returning to the U.S., Granskou served as president of Waldorf College (1929-32) and of Augustana College (1932-43). He became St. Olaf president during the strains of World War II, which included the departure of most male students and the location of a naval flight school on campus. Granskou’s inauguration in October 1944 was presided over by Dr. J. A. Aasgaard (class of 1898), President of the Norwegian Lutheran Church of America, and it included the dedication of the Rolvaag Memorial Library.

President Granskou led St. Olaf through its post-war adjustment into the eras of the Cold War, JFK, and Hubert Humphrey. Beginning with the GI influx, enrollment doubled. An extensive campus building program included Boe Memorial Chapel and a capstone student center and administration complex (eventually named for Granskou), one of several buildings designed by the Northfield architectural firm of Edward Sovik (class of 1939). A Phi Beta Kappa chapter was established, and a 1955 self-study led to several academic innovations after Granskou’s retirement. A leading advocate of church-related higher education, President Granskou also appreciated the honorary doctorate conferred upon him by Carleton College in 1963. 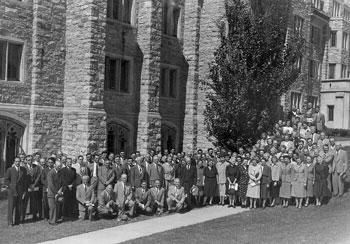