John N. Kildahl (1857-1920) emigrated as a boy from Norway to rural Goodhue County. His family’s ties to the founders of St. Olaf’s School were numerous. He was confirmed by B. J. Muus at Holden Church, before the family relocated to Northfield and before Kildahl left for Iowa and Luther College,

After his theological training, Kildahl returned to Northfield for ordination, by Muus, at St. John’s Church. Called first to nearby Vang and Urland congregations, Kildahl attracted attention through his earnest evangelical preaching and warm personality. Also serving briefly as principal and professor at Red Wing Seminary, Kildahl was called in 1889 to Bethlehem Church in Chicago, which flourished during his pastorate. In 1899, Kildahl returned to Holden as Muus’s successor, only to find himself unexpectedly elected President of St. Olaf.

A reluctant president, Kildahl began without ceremony. But many have credited him with defining St. Olaf as a strong liberal arts institution and college of the Church, which finds its mission in preparing young men and women for lives of vocational service. Students experienced him as a religious mentor, and he presided over a lively spiritual community. Bringing the curriculum up to date, Kildahl also recruited a distinguished faculty that included Carl Mellby in the social sciences, Ole Rolvaag in the humanities, F. Melius Christiansen in music, and Emil Ellingson in the sciences. Kildahl also began the construction of a more extensive campus.

Resigning in 1914, Kildahl spent the remainder of his career as a professor at Luther Seminary, St. Paul. He also served as pastor of St. John’s Church from 1899 to 1903 and participated in the congregation’s 50th anniversary celebration in 1919. 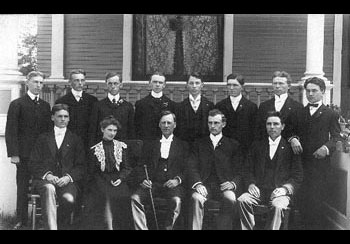