Thorbjorn N. Mohn (1844-1899) emigrated from Norway with his family, who eventually settled in rural Dodge County, Minnesota. He taught country school before attending Luther College in Decorah, Iowa, and Concordia Seminary in St. Louis. Ordained in 1873, he was called the following year as principal of the newly founded St. Olaf’s School and pastor of St. John’s Lutheran Church.

The new school would never have survived without Mohn’s perseverance in the face of difficulties. St. Olaf opened on January 8, 1875 as an academy or preparatory school, with 37 students, in an old public school building that the Northfield community had outgrown. The opening was attended by Northfield and Carleton friends, including Carleton student Andrew Veblen. The religious intentions of the institution were clear, but the school began without the official endorsement of any Lutheran church body. Kindly and pastoral, Mohn cultivated the continuing support of the original constituency in and around Northfield. The school relocated to Manitou Heights and the newly-built Main in 1878. A college department was added in 1886; and in 1889, when the institution was renamed St. Olaf College, Mohn became president.

By 1890, the student population had reached almost 150. Yet the college’s future was uncertain in 1894, as it celebrated its 20th anniversary: the United Norwegian Lutheran Church first adopted and then abandoned St. Olaf as its official college, and an economic depression cut enrollment. Mohn worked for the college’s re-adoption by theChurch, which came in 1899. Honored by Northfield and Carleton leaders as his health failed, Mohn died a deeply respected community figure. Businesses and both colleges closed for his funeral. 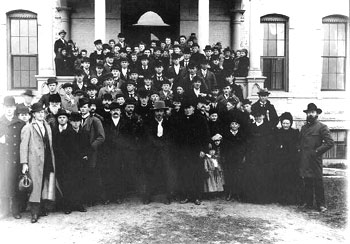