Sidney A. Rand served longer in the presidential office than any other recent incumbent. A native of Minnesota, Rand graduated from Concordia College in 1938. He completed pastoral training at Luther Seminary and did graduate work at Union Seminary and the University of Chicago. After serving as a pastor and a member of the Concordia religion department (1945-51), Rand became president of Waldorf College (1951-56), where Presidents Boe and Granskou had preceded him. When the American Lutheran Church was created through mergers in 1960, Rand became the first executive director of its Board of College Education.

St. Olaf graduate Fredrik A. Schiotz (class of 1924), President of the American Lutheran Church, officiated at President Rand’s inauguration, the first to include the presidential medallion. The Rand presidency saw significant academic innovation and institutional growth. The 4-1-4 calendar was introduced, the Paracollege was launched, and the college experienced the unrest of the Viet Nam War era. As enrollment expanded to 3000 students, new dormitories were constructed; and new facilities were provided for the sciences, athletics, and music. The international studies program flourished with the creation of numerous study abroad opportunities, and serious endowment work began. Under President Rand, St. Olaf was named Northfield Industry of the Year in 1979.

The college’s ties with Norway were maintained through the 1975 visit of King Olav V. When President Rand left St. Olaf, he was appointed ambassador to Norway. He was sworn in as ambassador by Vice President Mondale, assisted by Lois Rand. Sidney Rand subsequently served as president for Augustana College and Suomi College during presidential vacancies. 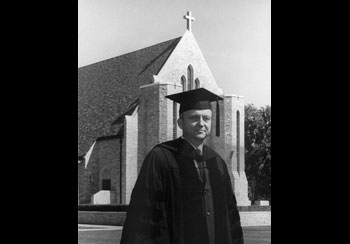