Lauritz A. Vigness (1864-1947) was born in the Norwegian-American immigrant community of Fillmore County, MN. He was educated at Augustana College, now located in Sioux Falls, SD, and at the seminary of the Augustana Synod. He began his career as a teacher of Latin and Greek at Augustana. In 1894-95, he served as the first president of Jewell College, Jewell, Iowa, before becoming president of Pleasant View Luther College in Ottawa, Illinois (1895-1914). Neither institution has survived.

The brief Vigness presidency was marked by transitions and challenges. The college secured formal accreditation. A 1917 church merger affiliated St. Olaf with the new Norwegian Lutheran Church in America. The academy department was moved, becoming a part of the Red Wing Seminary, while the Red Wing college department was consolidated with St. Olaf. U.S. entrance into World War I directed students from their studies into military training and service or into Red Cross activities. Ethnic traditions were challenged by a wave of nationalism. Vigness’s old-school manners and gentle disposition were challenged by increasing student assertiveness: relations were strained by a 1916 student body vote for a change of administration. Vigness resigned in 1918, taking the position of his successor Lars Boe as executive secretary to the board of education of the Norwegian Lutheran Church. 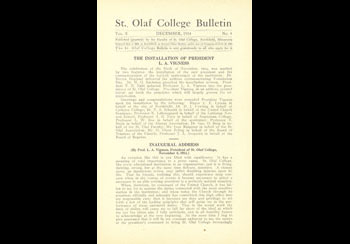