Chapter III: Up to Manitou Heights

THE St. Olaf’s School continued for three years in the temporary quarters down town. During those years the indefatigable Pastor Muus, with the support of neighbor pastors Bøckman and Quammen, was waging a vigorous campaign for the school, collecting money for a permanent site and a more substantial plant. Many stories have gone the rounds about how this pioneer pastor, in his determined, convincing approach, assessed his parishioners according to their means. If a man owned eighty acres, he asked of him $100, and if 160 acres, $200. It is an interesting historical fact that unprecedented blessings came to these generous donors in crops such as they had never before seen. Up to forty-four bushels of wheat per acre.
Mr. Harald Thorson’s early offer of land in the north part of town had been rejected. (The Rosary Parochial School was built on that site in 1927.) Other locations were investigated. A high hill far to the west of town, one hundred and thirty feet above the Cannon River, still covered with big woods, came in for consideration.
One day in the winter of 1875 Professor Reque and Mr. Thorson drove off the road to take a close look at the wooded heights. On account of the heavy brush and deep snow they were unable to drive up the hill. Leaving their horses about where the intersection of St. Olaf Avenue and Lincoln Street now is, they made their way on foot. The location seemed to them very desirable.
It was after negotiations were begun for the securing of this property that the students went up, on a holiday, to have their first picnic there. “This exploration would have been impossible for the ladies had it not been for the woodmen’s road, winding along to the corner of the present campus (1906) where there was an attempt at starting a stone quarry. There was also a rude but near the entrance to the campus.” Wild and difficult of access as these woods were, they had been entered before by a few students who found them an ideal place to practice their orations—a la Demosthenes. Little did those forerunners dream of the oratory that was to sound from those heights down through the years!
While Mr. Thorson was attending a meeting of the Norwegian Synod, at Decorah, Iowa, in June 1876, he received a telegram from his book-keeper informing him that Mr. Cutler, the owner of the land, had called to say that if Mr. Thorson wished to purchase the property, he would have to secure it at once with a first payment. A hurried consultation resulted in a return message authorizing the payment. The consideration was one thousand two hundred and fifty dollars for thirty acres — a twenty acre lot where the Main now stands, at forty dollars an acre, and ten acres to the west at forty-five dollars an acre. Soon thereafter it was learned that the Roman Catholic congregation had been interested in the hill as a possible site for a cemetery!
At the time, the location seemed rather far from town for a school. It was literally “in the woods.” Later one man remarked: “When I heard that you were going to build on that hill, I thought you were making a mistake, but I see now that the Norwegians are farsighted.”
The erection of the new brick building was undertaken in June, 1877. The plans were worked out by Long and Haglin, architects from Minneapolis. The contractor was Charles P. Anderson of Northfield. The corner stone was laid on July Fourth. For this auspicious occasion there were built a speakers’ stand and seats for the audience on the edge of the clearing west of the scene of operations.
The ceremony opened, appropriately, with the singing of Luther’s hymn “A Mighty Fortress is Our God.” Pastor Muus gave the address of welcome — in Norwegian. The Reverend H. A. Preus, President of the Norwegian Synod, gave a talk, also in Norwegian, taking for his text Psalm 111:10, “The fear of the Lord is the beginning of wisdom.” Pastor Muus thereupon read and translated a Latin document, “In Nomine Jesu.” This official paper was then placed in a tin box inside the corner stone, together with some minutes of the Norwegian Synod, the current issues of three Norwegian weeklies, and some freshly minted coins. By some misunderstanding the stone had been placed in the northwest, instead of the southeast, corner.
At noon a picnic dinner was served in the woods. In the afternoon President Mohn gave a talk, in English, and congratulations were extended by President Strong of Carleton and President Larsen of Luther College.
Except for the roof on the tower which was not laid till 1884, by September, 1878, “the Main,” as it was soon to be called, stood completed, sentinel-like, on the very brow of the hill, against a solid background of dense woods. It was fully paid for. 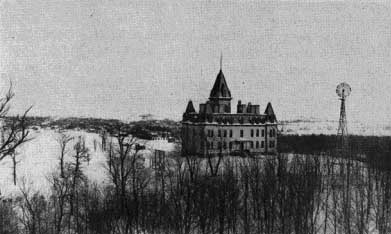