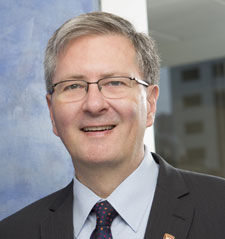 Alan C. Shepard ’83 believes in the power of higher education to transform lives, even after more than two decades as a professor and academic leader at universities in the United States and Canada, his adopted home.

A driving force throughout Shepard’s career has been an interest in the academic and administrative challenges facing contemporary universities. He was instrumental in creating Ryerson’s Digital Media Zone (DMZ), one of Canada’s largest business incubators and co-working spaces for entrepreneurs. At Concordia, Shepard has supported the creation of a space similar to Ryerson’s DMZ, providing Concordia students with the tools and resources they need to test, develop, and advance innovative and entrepreneurial ideas. Shepard has published books and articles and engaged in public service, including with the Montreal Board of Trade, the Stratford Festival, and Fondation Montréal, which supports start-ups in Quebec.