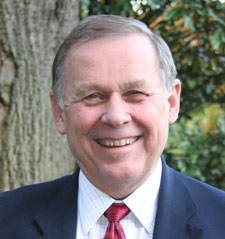 David L. Tiede ’62 is a well-respected theologian and scholar who has spent his life leading graduate theological institutions and teaching generations of faith community leaders.

He was a professor of New Testament at Luther Seminary from 1971 until his retirement in 2005, also serving as the seminary’s president for the last 18 of those years. He went on to become the Bernhard M. Christensen Professor of Religion and Vocation at Augsburg College from 2005 to 2010 and recently served as interim president of both Wartburg Theological Seminary and Luther College. Tiede attended Princeton Theological Seminary, received a Master of Divinity degree from Luther Theological Seminary, and a Ph.D. from Harvard in 1971, the same year he was ordained.

During his early years as a professor at Luther Seminary, Tiede also served as associate pastor of Trinity Lutheran Church in Minneapolis. In 2002, he became only the second Lutheran to be elected president of the Association of Theological Schools in the United States and Canada, and in 2005, Trinity Lutheran Seminary in Ohio awarded him the Joseph A. Sittler Award for Theological Leadership. Tiede was the founding chair of the Faith in the City initiative, and serves on the boards of California Lutheran University and Augsburg College.