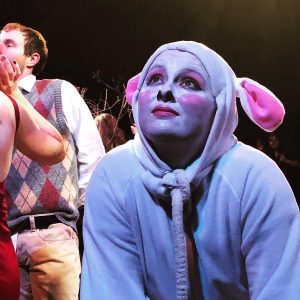 One of the advantages of St. Olaf College is the opportunity for roles in lyric theater productions, in contrast with a larger school where graduate students would get first dibs. The theater department puts on a musical annually, and the music department puts on a three-show season of opera, operetta, and musical theater. One topic in particular that deserves attention in relation to lyric theater is marking.

Marking is to sing very softly or not at full voice. A full-length opera or show can be hard on a young singer’s voice, so most singers mark to some degree during rehearsals. The more stable the voice technique, the less need for marking. Some fine singers never mark, yet their voices remain in good shape. Other singers never sing out fully except in performances.

There are times when rehearsals and performances crowd together, or when the singer is in less than optimal physical condition, during which period marking is advisable. Singers may want to learn to mark in order to avoid the wear and tear of repetitious rehearsals, particularly those that include ensemble obligations.

As a responsible cast member, a singers sings his or her entrances at normal dynamic level so as to provide cues for peers, then drops back to less than full voice. Men have the option of switching into falsetto for higher passages. Occasionally, high notes may be lowered an octave. But it is unwise to transpose whole phrases that lie in the passage zone or above it to a lower octave, so that the singer is rehearsing large parts of the role in the wrong octave. This practice invites the pressing of low notes and fails to develop confidence in maintaining upper-range tessitura.

To know how to pace a major role, the part has to be sung in its entirety. Saving the voice for the premiere is a grave mistake, because a role needs to be sung repeatedly into the voice so that the performer will know at what point technical matters need special attention. The less-experienced artist ought to go over the technique of marking with his or her teacher, making decisions in advance as to what portions to mark.