1. All of the living Phi Beta Kappa initiates from St. Olaf’s Class of 1950 were invited to the chapter’s spring initiation and banquet, preceded by a reception in their honor (5 attended, with their spouses), and to the chapter’s Commencement initiation (coinciding with Reunion Weekend), followed by a reception in their honor (at least 15 attended, with their spouses).

2. An endowed fund was established to cover local initiation expenses and to support the chapter’s annual activities.

3. A history of the Delta of Minnesota was written by College Historian Joseph M. Shaw ’49. The St. Olaf Office of Planned Giving paid for a copy to be mailed to each of the 3000 living members of the chapter as part of the College’s 125th-anniversary fund drive.

The “Nifty Fifties” photo below was taken by Betty Ann Johnson Stromseth ’53 at the reception held on the morning of Commencement Day in the hallway outside the Viking Theater (Buntrock Commons) All of those pictured are Phi Beta Kappa graduates of St. Olaf College in the Class of 1950 except for Helen M. Luvaas Fjerstad, former music instructor at St. Olaf and one of the eight charter members of the Delta of Minnesota. 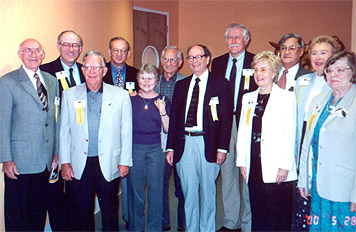 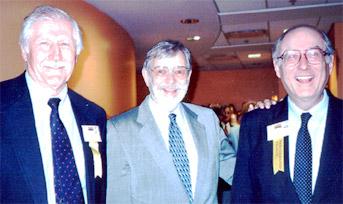 Lowell E. Johnson ’52 (in center of photo), Professor Emeritus of English at St. Olaf, is praised by John E. Reinertson ’50 and Herbert M. Stellner, Jr., ’50 for his Herculean efforts: not only did he chair the chapter’s Semi-Centennial Committee, but he also set up the new Delta of Minnesota Endowed Fund with the assistance of Paul H. Schmitt, St. Olaf’s Director of Planned Giving.