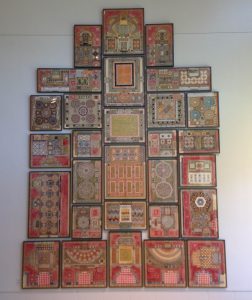 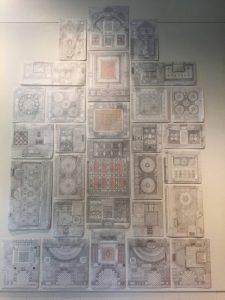 The tessellated floor of the Basilica of San Marco in Venice is often described as “a marble carpet.” It was laid by Byzantine craftsmen from Constantinople and includes both opus sectile (obtained by setting out pieces of different colored marble to create geometrical forms) and opus tessellatum (obtained with tiny pieces of marble or glass used to create floral motifs or animal figures).

As the symbolism of the floor was inspired by literature and by oriental and western textiles, I incorporated collage elements in this drawing that contain fragments from medieval sources ranging from illuminated manuscripts to the Bayeux Tapestry, in addition to pieces of earlier drawings. Along with the multiplicity of patterns, notice the two cocks carrying a trussed up fox in one panel, three versions of the Byzantine eagle, a rhinoceros under a palm tree, as well as the famous peacocks.

This drawing took over two years to complete and just as I was finishing it, I happened to see an exhibit of rubbings at the Menil Foundation in Texas. Those ghostly images made me think about the fate of San Marco’s magnificent floor as sea level rise continues to threaten Venice. What might remain after it floods?

If you turn around you will see the same floor again, but this time drawn in pencil on vellum. The gold and copper leaf has been affixed to the back of the vellum creating visual distance. In this version, the color has mostly been lost, as happens the deeper one goes beneath the surface of water. Yet, paradoxically, it is easier to see the patterns when there is little color.

This drawing, the twelfth in the Anastylosis Project, is titled The Ocean Floor – in reference to the marble panels of the central aisle, but also to the site as a probable casualty of climate change. This drawing is a departure from the earlier Anastylosis drawings that meditate on the past and the passage of time. While this drawing also is concerned with time, it is not the time of the floor today, but what the future may hold.