A Commitment to Worship

St. Olaf College has always recognized the importance of the ancient communal tradition of daily worship, and Boe Memorial Chapel has long been the most visible symbol of the college’s commitment to this value. It is a spiritually inviting place — as evident in its music, architecture and beautiful stained glass windows — open to worshipers whenever they need it.

Worship is the primary purpose of Boe Memorial Chapel. During daily chapel services the community hears from faculty members, students and campus guests. And each Sunday morning while school is in session, the Student Congregation gathers for worship. Student and faculty musicians offer their gifts and talents, not just as soloists but as members of bands, choirs, orchestras and small ensembles. Just as significantly, congregational singing delights the ear and the spirit. The chapel provides visual and acoustic space for the St. Olaf community, and its friends and guests, to sing and make melody to God.

In the spring of 1877, many meetings were held to discuss plans for the building of Old Main. By July 4 of that year, a cornerstone was laid for the great building. Upon completion, Old Main would include classrooms, living quarters, dining facilities and a chapel. The chapel occupied the southwest quarter of the second floor and was used for worship by the St. Olaf community.

In 1906, the building of Hoyme Memorial Chapel was completed. The chapel was named after the first president of the United Norwegian Lutheran Church, Formand Hoyme (“Formand,” as he was called, is the Norwegian word for “president”). Hoyme Chapel was built in the shape of a Latin cross and met the needs of the growing campus community. The building was used for music recitals, large campus events, and, of course, daily chapel.

In 1923, Hoyme Memorial Chapel was destroyed by a fire. In 1925, the Manitou Messenger recorded that, “Its downfall was as majestic as had been the days of its prime, and the fact that Dr. Christiansen played the splendid old organ for the last time on the morning preceding the fire, seemed later a not ungrandiose prelude to the … downfall of this honored edifice.”

For a thirty-year interim, chapel services were held in the college’s gymnasium (now home to the Theater Department). The Rev. Hoyme would later reclaim his commemorative name with the residence hall, Hoyme Hall. 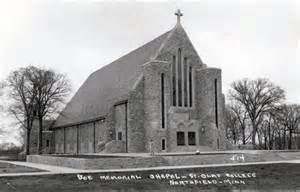 Eighty years after the founding of college, St. Olaf experienced the “birth of twins.” The St. Olaf Student Congregation was founded in 1952, and Boe Memorial Chapel – named in honor of Lars. W. Boe, the fourth president of St. Olaf College – was ready for student use in the fall of 1953 and officially dedicated in 1954.

Rev. Dr. H.B. Hanson, long-time religion professor at St. Olaf, served as the first College Pastor from 1952-1954. Pastor Hanson was instrumental in founding the St. Olaf College Student Congregation. In 1954, Rev. Clifford Swanson ’42 was named College Pastor. Pastor Swanson served until 1981. Rev. Bruce Benson was called as the College Pastor in 1981 and served until his retirement in 2011.

In the spring of 1989, under the leadership of Pastor Benson, the congregation voted to become a Reconciling in Christ congregation by accepting an “Affirmation of Welcome” which publicly affirms gay and lesbian people as children of God and invites all people to participate fully in the life of the student congregation.

One of the many memorable events during Pastors Benson and Koenig’s ministry at St. Olaf occurred in the early morning hours on Sunday, September 4, 2005, when Boe Memorial Chapel was struck by lightning. The bolt caused structural damage and silenced the organ. The opening service for the academic year was held a few hours later with cheery voices and piano accompaniment.

Even before this event, plans for renovation had begun. Because of the chapel’s great width and tall, pitched roof, it had very little wall space compared with its vast ceiling, impacting the acoustics of the room. Consequently, improvements were made to carry sound deeper into the space, offering more support for congregational singing.

In 1997, acoustical consultant Robert Mahoney proposed a reconfiguration of the inside of the chapel that included reshaping the ceiling and side walls, based on a concept he and Buntrock Commons architect Norris Strawbridge had developed. Assistant Professor of Art Steve Edwins ’65, principal of SMSQ Architects in Northfield, refined the concept for the Boe Chapel project, which included extending the worship platform out into the congregation, integrating new lighting and drawing from the windows to develop the chapel’s vibrant color scheme. Renovation was completed in 2007.

The acoustical tiles in the ceiling were removed, and the ceiling and new wall surfaces were made extremely stiff in order to reflect sound more uniformly to encourage singing and make the performance of music and the spoken word more clear. Energy efficiency has been improved with the use of soy-based insulation. Other materials used include wood flooring recycled from birch logs salvaged out of Lake Superior and earthy clay tile flooring.

The wall structures that form colonnades on the sides of the worship space were designed visually to float within the structure and appear not to carry the weight of the roof that is held up by the wood arches. The colonnades are designed to emphasize the verticality of the chapel without accentuating its length and to frame each of the stained glass windows. The structures both reflect sound back more quickly to worshipers and provide various surfaces where the colors of the windows can play. 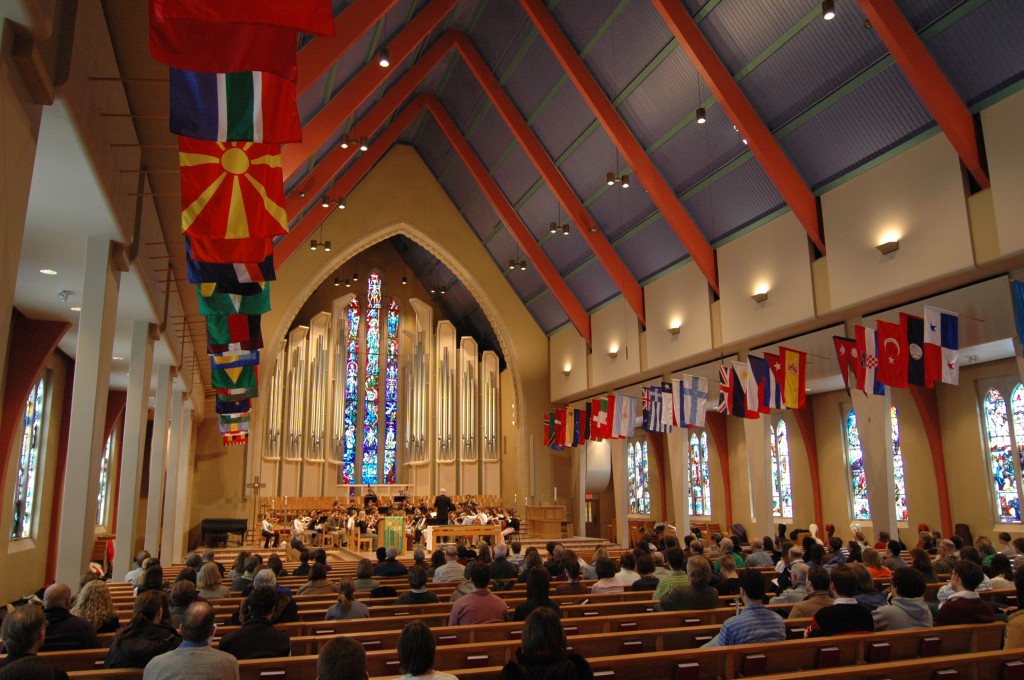 A major concern during the reconfiguration process was the preservation of the windows, the single most valuable aesthetic dimension of the chapel. In fact, the windows have gained prominence. The widened side aisles in the nave, where people may walk and view the windows, reflect the building’s exterior Norman Gothic architecture.

In many ways, the reconfiguration of the chapel allows the building to fulfill its potential. Acoustically, it now is a worthy host to the musical ensembles that perform in it. Visually, it is more welcoming, its color scheme more open. Most importantly, as evidenced by the energy and resources necessary for the reconfiguration, the emphases on faith and commitment to fostering lives of worth and service that are foundations of St. Olaf’s identity also have been affirmed.

Today, just as in 1954, Boe Memorial Chapel stands at the heart of campus as a symbol of the centrality of spiritual development in the life of the college. It is a place where guests are cordially invited to pause for individual meditation, to study the windows and to join the community in worship.

It is impossible, of course, to provide a complete history of our congregation. Dedication and renovation dates only provide a skeleton for the story. The real life, the flesh and blood of the congregation is experienced in worship, in conversations about faith and daily life, in service projects and Bible studies. A complete history would include pictures of retreats and community meals. It would include wedding pictures and funeral bulletins. It is this living and breathing history that continues to inform the living faith present in the ministry of the St. Olaf College Student Congregation today.