The windows in Boe Memorial Chapel were designed and completed by the Conrad Pickel Studio of Waukesha, Wisconsin. The visual and thematic development of the windows in the early 1950s was the work of faculty members of the St. Olaf Department of Religion; Clemens Granskou, college president from 1943 to 1963; St. Olaf Pastor Clifford J. Swanson; Dr. Randolph E. Haugan, former chairman of the college’s board of trustees; and Dr. E. Clifford Nelson ’33, then dean of Luther Theological Seminary and later a member of the St. Olaf religion faculty.

The windows are made of antique glass (named so because it is created using the same methods utilized by glass makers centuries ago) manufactured in Holland, Germany and the United States. Metallic ingredients are added to colorless molten glass to produce the variety of colors.

Boe Chapel’s windows portray the story of creation, redemption and sanctification throughout the Bible and the history of the Christian church. The windows on the west wall portray the history of salvation beginning with creation and culminating with the birth, life, ministry and death of Jesus Christ. The east wall windows tell the story of the early Christian church, beginning with Pentecost, continuing with the ministry of the Apostle Paul and the Reformation. Central throughout this history is Christ as head of the church, as he appears in the chancel window. 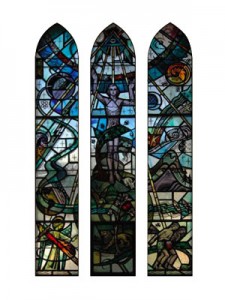 Creation: This window provides a symbolic narrative of the first three chapters of Genesis, including the story of humanity’s creation and fall. Because humans are at once children of God and victims of their own pride, the stage is set for the promise and fulfillment of God’s redemptive work in history. 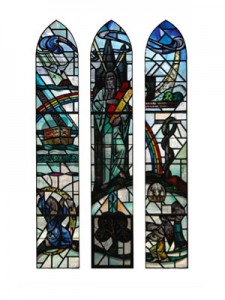 Promise: Following the fall, God’s judgment comes in the form of the flood. Even here, salvation and God’s mercy are present, as represented in the images of the dry land, the dove and the rainbow. Abraham’s vision of the stars in the lower left lancet attests to God’s promise that, through Abraham’s seed, all the nations will be blessed. In the center, Moses holds the tablets containing God’s law. The rain of manna, the bronze serpent, the Promised Land, the Ark of the Covenant and the tree of Jesse represent the presence of a redeeming God. 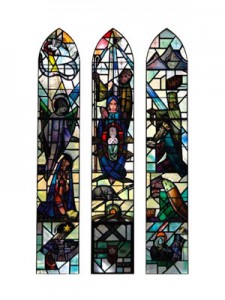 Incarnation: The angel Gabriel appears to the Virgin Mary, announcing that she will be the mother of Christ, the Prince of Peace. In the center, Mary and Joseph look upon the newborn Christ as magi from the East arrive, having followed the light of a star to the stable. The tranquility of the scene is upset by Herod’s declaration that, due to the threat posed to his earthly throne, he would take the child’s life. The lower right lancet depicts the Holy Family fleeing to Egypt. 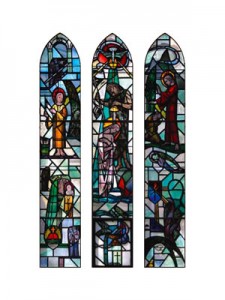 Preparation: Focusing on Jesus’ preparation for his ministry, this window shows Simeon, in the lower left, holding the infant Jesus. At the top of the panel is the boy Jesus seen speaking with the teachers in the temple. The baptism of Jesus by John the Baptist in the Jordan River represents the end of the old and the beginning of the new. Tension is evident, however, as Satan lurks in the lower right corner, waiting to test Jesus. In the upper right, Jesus invites his disciples to follow him. 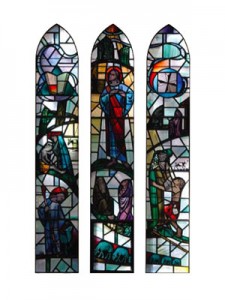 Teachings: In this window of parables, Christ is depicted teaching not through rules or precepts, but with revelatory stories. In the upper left, the good Samaritan ministers to the needs of a stranger, while below him the good shepherd tends to the weak in his flock. On the far right the father welcomes the prodigal son back into his house. Through these parables Jesus teaches the multitudes, shown at his feet, the nature of God: loving, merciful and forgiving. 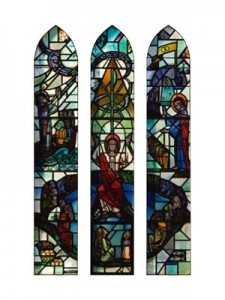 Miracles: Jesus dramatizes his teachings through the miracles he performs while on earth. In the window Christ calms the storm at sea, setting the fearful disciples at ease. He changes water into wine at the wedding in Cana and feeds the multitude on the mount from a few loaves of bread and two fish. All of these miracles demonstrate Jesus’ power to free humanity from fear. 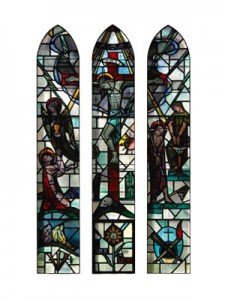 Crucifixion: The crucifixion, in which Jesus suffers and dies for humanity’s sins, represents the ultimate expression of God’s love for the world. On the left, Jesus’ struggle in accepting this role is depicted in his agonizing prayer in the garden of Gethsemane. The right panel shows Christ brought before Pontius Pilate by an angry mob. Pilate is depicted washing his hands before the crowd, further dramatizing Jesus’ innocence. At the scene of the crucifixion at Golgotha (place of a skull), the dark storm clouds and lightning in the heavens above Christ on the cross serve as a contrast to God’s redemptive rainbow from the Promise window. 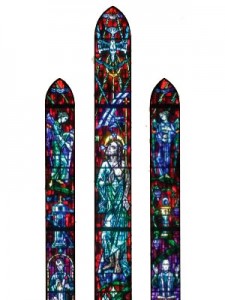 Resurrection: The chancel window serves as the focal point for the story of salvation. The stone is rolled away from the entrance to the tomb and Jesus arises victorious over death. The soldier’s broken lance in the center symbolizes the earthly power that Christ has defeated. The theme of grace appears throughout the window. The bottom left lancet depicts Jesus’ baptism, which continues above in the baptism of the people of God’s church. Through this, the promise of Christ’s resurrection is extended to all. The bottom right lancet depicts the institution of the Lord’s Supper flowing into Boe Chapel’s sanctuary, where Jesus is ever present. The sheaves of wheat and grapes, along with the chalice and host, intimate the administration of the sacrament. The preaching of God’s Word is depicted in the center panel. 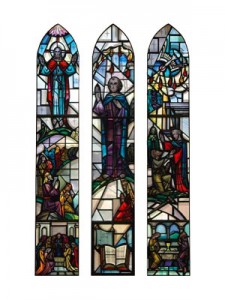 Pentecost: The ascension of Christ into heaven is shown in the upper left lancet, below which the disciples gather. The descending dove symbolizes the Pentecost, and the presence of the Holy Spirit is represented in the 12 flames for the 12 Apostles. Peter is depicted preaching and healing, exemplifying the Apostles’ response to the Spirit. The scroll and book atop the altar suggest the promise of the Old Testament and the fulfillment of the New. 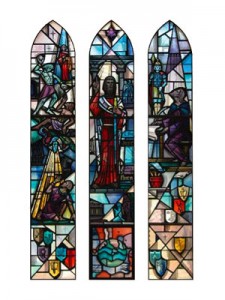 St. Paul: As indicated in his witnessing of the stoning of Stephen, the first Christian martyr, Paul’s life began as a persecutor of the church. Paul’s subsequent ministry in the synagogues and in Athens is depicted, respectively, in the Star of David and the Parthenon. Paul is shown on the right writing his letters in prison. The streams on the globe represent his missionary travels, while the shields and their symbols suggest other missionary Apostles. 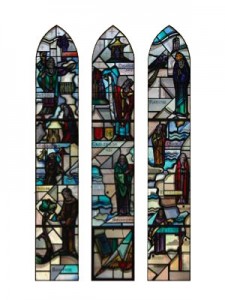 The Early Church: Rome, Constantinople, Jerusalem, Alexandria and Antioch stand in the background as centers of the early church. The figure of Athanasius at Nicea suggests the development of the church’s creed emphasizing the holy and human natures of Christ. The right and left sides of the window represent missions to the East and West, and St. Augustine stands for the pre-medieval church. Scholasticism and mysticism are symbolized at the bottom. 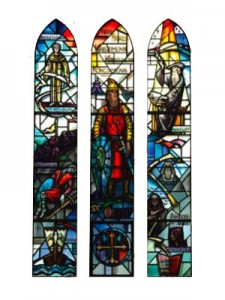 Pre-Reformation: Norway’s King Olaf and his cry, “Fram, Fram, Kristmenn, Krossmenn, Kongsmenn” — “Forward, Onward, Men of Christ, Men of the Cross, Men of the King” — symbolize the spread of Christianity into northern Europe. To the left, Olaf’s death at the Battle of Stiklestad and Leif Erickson’s voyage to America are depicted. Other figures who paved the way for the Reformation — Bernard of Clairvaux, Wycliff, Huss, Francis of Assisi and Savonarola — also are shown. The Guttenberg Bible in the lower right lancet denotes the advent of printing, a major factor in the spread of literacy and Reformation teachings. 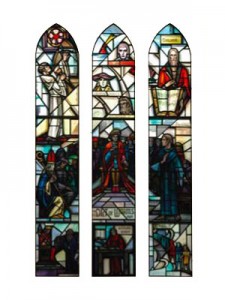 Reformation: Beginning in the upper left corner with Martin Luther nailing his 95 Theses to the church door in Wittenberg, this window traces the history of the Reformation. Luther appears in the center before the papal legate at Worms in 1521, after which he was excommunicated. Luther’s other accomplishments are depicted in the lower window: the Luther Bible written in the vernacular of the people, the Luther catechism and Luther’s hymns, represented by the music staff. The upper center lancet depicts Luther’s associates, Melanchthon, Bugenhagen and Justas Jonas, and honors other reformers such as Huldreich Zwingli, who spoke against indulgences, and John Calvin, founder of the Reformed Church in Switzerland. 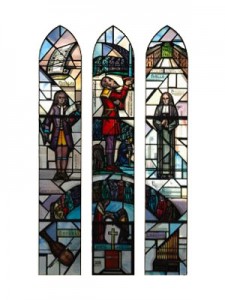 Post-Reformation: Sweden’s King Gustavus Adolphus, who established peace in Germany following the 30 Years War, thus making the spread of Reformation theology possible, is featured in the window’s center. The depiction of the presentation of the King James Bible suggests the availability of the Word of God to all people. The left lancet shows the musical accomplishments of the leaders of Lutheran hymnody, and the University of Halle, Germany, in the right lancet represents the development of pietism. 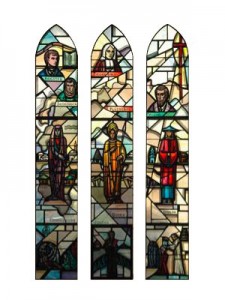 World Mission: Early Lutheran missionaries — Hogstad in Africa, Schreuder in Madagascar, Ziegenbalg and Pultschau in India and Nelson in China — are depicted at the top of the window. Below are other protestant missionaries: David Livingstone in Africa, William Carey in India, Adoniram Judson in Burma (now Myanmar) and James Hudson Taylor and Robert Morrison, both in China. Healing, preaching, teaching and the administration of the sacraments, the major aspects of the church’s ministry, are represented at the bottom. 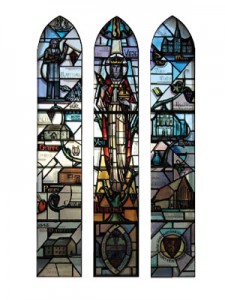 Lutheranism in America: Christ in the center represents authority over all life, as the vine behind him sprouts symbols of the educational elements of the church. To the left, the history of Lutheranism in America is indicated, and the names of early Norwegian church leaders appear at the bottom of the lancet. St. Olaf College is represented in the right lancet through the campus buildings — Old Main, Hoyme Chapel and Boe Memorial Chapel — and the names of college founder Muus and former presidents Mohn, Kildahl, Vigness, Boe and Granskou. The seals of the Evangelical Lutheran Church and St. Olaf College appear at the bottom. 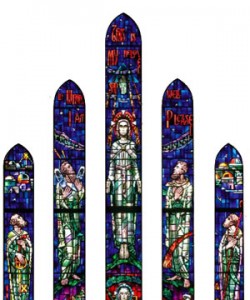 Transfiguration: The south window of the chapel presents the New Testament theme of transfiguration, the capstone to the entire window story. The fulfilled promises of the Old Testament are represented in the figures of Moses and Elijah, who flank Jesus, with Peter and James beside them and John below. God’s words at the baptism of Christ, “This is my beloved Son in whom I am well pleased,” are reiterated here. The lower section of the window addresses the theme of the New Jerusalem, as mentioned in the Revelation of John. Depicted is the throne in heaven encircled by a rainbow, the elders with golden crowns, the seven lamps of fire and four beasts: the first like a lion, the second like a calf, the third with a face like a man and the fourth like an eagle, all saying “Holy, Holy, Holy.” The center lancet features the Lamb of God upon the book with seven seals described in Revelation. From the lamb, and the throne of God, runs the river of the water of life. To the right of the throne, holding a scroll, is St. John, author of the Apocalypse.