Evolution of the heating plant 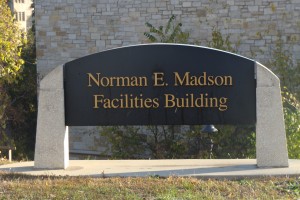 The power plant became the Heating Plant when St. Olaf quit making its own power around 1960. The Heating Plant became The Norman E Madson Facilities Building in the mid 2000s. Norm had been Director of Facilities with St. Olaf for 17 years when he retired in 1988. An architect, Norm came to the College from the Northfield firm, Sovik, Mathre, Madson, and while a partner he had worked on many St. Olaf projects. Norm was as good a preacher, as he was designer, family man, and person. St. Olaf may be a bit unique, well it is, but it may be the only school like it to have significant memorials to two facilities management people. The John Bernstsen Memorial Garden is on the south side of the Rolvaag Memorial Library.

In 1905 St. Olaf opened its first central heating/power plant, just east of Holland Hall. The plant generated steam for heat, and for a steam turbine spun generator, for the first electricity on campus.

Leaders at that time made an expensive decision, which has been beneficial since, when they opted to put steam and electricity distribution in tunnels. Successive generations of leaders stuck with this, and today virtually all of the steam, chilled water, electricity, computing, and phone lines are in accessible tunnels. This is a tremendous advantage for maintenance work and reliability. The very first tunnels, to Steensland and Old Main, are still in the ground, and the Steensland tunnel is active. Old Main’s was mostly abandoned when Regents Hall came, and new lines to Old Main come from Regents today. Click on the photos for enlargement. 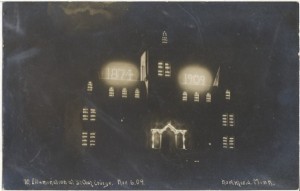 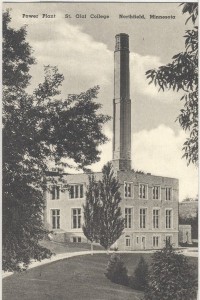 The plant had a fire in 1922, and while it was put back together and would run for some time, the event triggered construction of the first unit of the present building, which opened in late 1923. More building triggered an expansion of the plant in 1937. It was, and is today, located at the west end of Manitou Field. The top floor of the 1937 building housed the College’s creamery, where milk from the Springbrook Farm was processed.

AVP for Facilities, Pete Sandberg, remembers doing a tour of the building with a Manitou Messenger reporter, and mentioning the creamery. He was surprised when the story appeared, and listed a crematory as one of the plant functions…who knew?

The building boom years of the late fifties to late sixties triggered the largest expansion of all in 1966, when the present 100,000 pound per hour (PPH) boiler was constructed. Electric generation was given up with this expansion of space, and the steam turbine generators went to Faribault, where they were installed at the Minnesota State Academy for the Deaf.

In 1989 St. Olaf had just opened the new Ytterboe Hall, which is 115,000 square feet, and was constructing giving an addition of 75,000 square feet to Rolvaag Memorial Library. Before these projects, the heating plant was serving 1,335,000 square feet of all kinds of space.

The plant had two working boilers, one rated at 100,000 PPH, and another rated at 50,000 PPH. In order to match load to the boilers to get greater efficiency, the smaller unit ran the campus from about May to the beginning of November, with the larger taking us through the winter months. The summer load was too small to let the boiler be very efficient at that time.

St. Olaf runs on high pressure steam (150 psi), so that the distribution piping can get the BTUs we need to all locations in a relatively small pipe. The College has some year round functions that depend on medium pressure steam, so going to low pressure for some months is not a great option.

When the College was 1,335,000 sf, the peak steam flow on the coldest day would be about 75,000 PPH, so we knew that there was no viable redundancy if the large boiler had a problem. We also knew that there was potential for a significant building program that would start with Ytterboe and the Rolvaag addition and renovation, so planning for this system got started.

Nearly every roof on campus was behind life-cycle when all of this started. Today, all are in life-cycle, and all meet or exceed the energy code. In 2006 all of our slate roofs were destroyed by a freak hail storm. None were insulated at the time. Insurance paid for the slate systems, but the St. Olaf capital budget funded a huge insulation project on every slate roof.

New construction and major renovation are guided by the Sustainable Design Guidelines, which we believe produces a LEED Gold – Platinum building. In fact, Regents Hall of Natural Sciences achieved LEED Platinum, and is the largest, most technical college or university building to have reached Platinum in the world. It operates on just 25% of the energy code model prediction for electricity. 44% of our buildings now perform at that level regarding energy, nearly 848,000 square feet of space.

A new boiler, better matched to the lower summer loads was installed in the heating plant, and it includes an economizer section in the flue, to reclaim heat from the flue that is used to warm incoming combustion air. This 30,000 PPH unit is over 90% efficient with the economizer section installed. 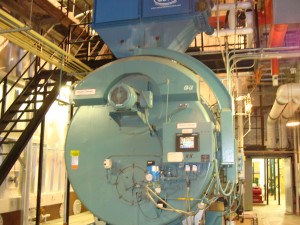 The blue section at the top is the economizer

With this unit in place, the College is now protected against a failure of any of the boilers. Even if the 100,000 PPH unit was out of service, the other two can be operated together to meet any imaginable steam demand. This kind of back up is especially important to us with so many students in residence.

In addition to boiler capacity, the plant also has redundant fuel sources. The primary fuel is natural gas but all three boilers can also burn #2 heating oil in case of an interruption in the gas supply. This capability also allows us access to Xcel’s large volume interruptible gas transportation rate. In exchange for agreeing to take our load when needed by the utility, we get a reduced Local Distribution Charge. This can happen if extreme cold means consumption in the city is so high that system pressure drops, if there is a pipeline problem serving the city, or occasionally if Xcel misses on their daily quantity nominations and does not own enough gas to sell us.