The College receives 13,800 volt, three phase, electricity from Xcel near the Madson Facilities Building on the east side of the campus. There is a single feed, meaning we are somewhat exposed to trouble on those lines. Twenty-five years ago, there was no standby power option available to us, so any of a number of problems could make the campus black. There were transformers at Madson that stepped power to lower voltage, and radial feeders served most of the campus. That means there is a discreet service to each building, so a break would mean darkness until it could be repaired. 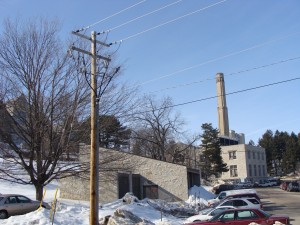 When we knew a major building program would get underway, the utility master plan laid out a plan to “loop” the distribution system and serve it with primary power, the 13,800 volt supply. Power was transformed to the voltage any given building needed at its service entrance.  A loop is just that, a circle. Looping means that a problem with the conductors anywhere on the loop can be isolated by opening switches on the trouble side of the closest building services, and all of the buildings will stay energized.

Using primary voltage is important because voltage is sort of like water pressure. If you only have one hose, more water can go through it if the pressure is raised. Similarly, more watts can go through a wire if the voltage is raised. If we tried to loop all of the buildings at lower voltage, the combined load would mean that wires would have to be huge, and very expensive.

Today, the College is completing the final phase of looping. It evolved into a system in which there are three sub-loops that can be connected by switching so that there  is even greater redundancy than if there was just one. Splitting into first two, and then three, greatly increased the capacity of the total system as well.

When a sister college was hit by a tornado in the late 1990s, we used the occasion to push for development of 100% standby power for the St. Olaf campus. With nearly 3,000 students in residence, going without power for any length of time is a serious life safety issue. With a single service, the College was vulnerable to power interruptions, even if our interior distribution was better than it had been.

We met with Xcel several times, and finally decided to enroll the College in a peak limiting program. We agreed to take the College off Xcel electricity when they had capacity issues, in exchange for a reduced demand charge on our bill. In this sort of program, the customer has to get off Xcel within fifteen minutes of them asking.

There are two options for the rate hoped for. First, we could shut the entire place off. Not a viable option. Second, we could start making our own power, and do it until the Xcel interruption was over. We committed to that, and the annual savings on demand charges paid for the project we would build in eight years.

In the fall of 1999 the college brought a 4.2 MW diesel generating plant on line. It supplies the campus in the event of loss of Xcel power, AND, it is available for load shedding when Xcel asks us to take our own load. In a very innovative plan, one of the three generators doubles as the emergency generator for Regents Hall of Natural Sciences. This capability makes St. Olaf a serious civil defense asset for the community and area, as well as serving faculty, staff, and students at the College. 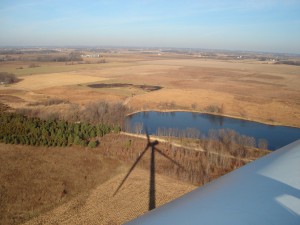 All of this supported a large building program for several years, but in the early 2000s, we knew a very large science project would be coming. Regents Hall of Natural Science would be nearly 200,000 and we projected that its operating cost could exceed $1,000,000, so we looked hard at many options to reduce its impact on the operating budget. Renewably generating the electricity required, on campus, looked like the best option.

Facilities made a grant application to the Minnesota Renewable Development Fund to help fund a 1.65 megawatt (MW) distributed generation wind turbine. “Distributed generation” means that the project is placed where the power is consumed. The project cost totaled $2,500,000, the RDF granted $1,000,000, with the balance coming from the College capital budget. The turbine supplies between 3,000,000 and 3,500,000 KWH per year, or about 50% more than Regents Hall requires. The excess is enough to off-set the small natural gas increase at the heating plant, so RNS and the turbine combined are a net zero project, and we avoid $265,000 of electricity purchases each year.

Additional wind is not a great option because the turbine was sized to our minimum demand to avoid selling many KWH. As it is, many evenings the turbine supplies enough power to operate the entire campus. If another machine was on line, that power would have to be sold at a fraction of our cost of purchasing KWH ($0.075 in FY 2014).

We are currently looking to add additional generation by photovoltaics, and installed the first small system as part of the renovation of Kildahl Hall during the summer of 2014. The 14 KWH system is operating and working well. 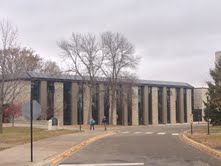