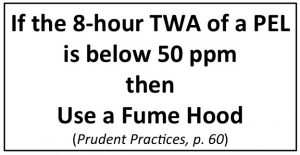 In addition to skin contact, substances can be hazardous simply by being exposed to the atmosphere because the harmful vapors can then come in contact with or be absorbed into a person’s body.  Therefore, most substances have some guidelines for exposure, such as OSHA’s Permissible Exposure Limits (PEL) or ACGIH’s Threshold Limit Values (TLV).

OSHA set PELs to protect workers against the health effects of exposure to hazardous substances.  The PELs are limits on the concentration of a substance in the air, and they may also contain a skin designation. The numbers are usually expressed in parts per million (ppm) or mg/m3.
In 1989, federal OSHA revised its PELs under 29 CFR 1910.1000, which Minnesota OSHA adopted.  Although federal OSHA has since reverted to the pre-1989 PELs, Minnesota OSHA still enforces the 1989 PELs for substances that are not covered by separate standards.

The American Conference of Governmental Industrial Hygienists (ACGIH; http://www.acgih.org) is “an organization devoted to the administrative and technical aspects of occupational and environmental health.”  The TLVs® and BEIs® were developed by the ACGIH to “recommend airborne concentrations of agents and exposure conditions for use in the practice of industrial hygiene and by other qualified professionals to protect worker health.”