Quoting the Northfield News, the attendance in early Nov. 1901 was 250 with hopes of reaching 300 before the end of the year.

Kildahl wanted Ytterboe to have charge of the boys as well as the finances. It became necessary then for Ytterboe to live on the hill again, and so on Feb. 28, 1901, we moved into the quarters prepared for us on the first floor near the front entrance of the new Men’s Dormitory [later renamed Ytterboe Hall]. 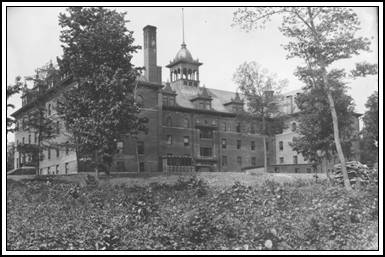 The building was not quite complete; several things were left to do. At the east entrance, for instance, the rubbish, plaster­ing, boards, etc., were piled so high that one could walk in on boards without using the stairs. On the 17th of March things were so much in readiness that the boys could move in and the kitchen and dining room transferred from its old quarters in the Old Main to these nice new quarters in the dormitory.

It was a joyful day for all concerned to get into such fine quarters—steam heated—no more wood to carry for the boys. We had a festive supper that evening with Pres. and Mrs. Kildahl as our guests.

That school year we used only the first and second floors. Several students rooming outside had taken rooms for the year, and so the building was not filled until school opened again in the fall of 1901. Soon after moving in we had an open house so that the citizens of Northfield could see our fine new building. Coffee was served to them in the dining hall. Many were the exclamations of praise of the new building. It was then the largest “dormitory for boys” in the state.

I found it easier to live in this building. The boys were not so noisy as the classes had been. We took our meals with the students. The meals were good; but keeping discipline in my family with P.O. Holland [Class of 1904] pinching the children under the table was not so good.

The woman who had cleaned for the school in the Old Main came to Ytterboe one day and said she believed she would have to give up her job. She could not find her way in this big building with so many rooms, she would get lost. He persuaded her to stay saying she would soon get used to it, he did not know the location of every room either but hoped to learn soon. She was such a fine and conscientious worker we did not like to have her go. And so she stayed on for some time.

A telephone was installed, which was new to many. I remember there was a call for the janitor. I went to get him; he protested using it. I finally persuaded him to listen, and all of a sudden he dropped the receiver and stared at me, say­ing, “It is Lina (his daughter); you talk to her, I can’t!” He finally succeeded in talking. Later I saw him walking down the hall shaking his head and laughing—this was too modern for him.

Men’s Dormitory Dedication
At the dedication of the dormitory in June 1901, another train-load of del­egates came down from the Annual Meeting, this time to see the new building. Again the crowd was served lunch, not by the citizens of Northfield this time but by the college. And how we did work to get it all ready!

A delegation of students who remained here for the occasion, together with the women of the faculty, made 3,000 sandwiches. It was none too many; that together with crackers, cheese, pickles, doughnuts, and 45 gallons of coffee constituted the lunch. It was served under the trees after the services. All seemed pleased to get a cup of coffee.

President Hoyme [United Church] dedicated the building. He also laid the cornerstone on Nov. 6 the previous year. According to the Northfield News, the building cost $60,000. The cost of the president’s residence, built at the same time and now known as Manitou Cottage, was $4,500. The building committee for these two buildings was Rev. I.M. Dahl, Mr. O.A. Veblen, and Ytterboe. 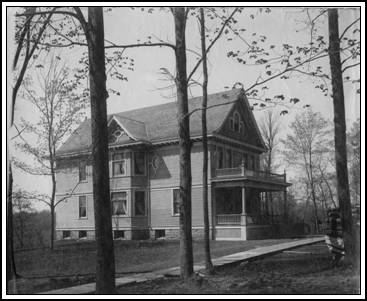