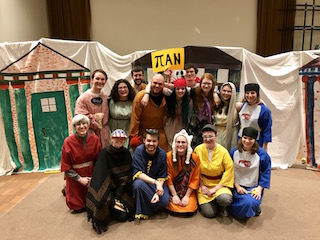 Click here to read a news article about the the 2018 production of Menander’s Dyskolos.

Menander (c. 343-291 BCE), a famous playwright from Athens, wrote over 100 comedies in Greek; many of these were later adapted and translated into Latin by the Roman playwrights Plautus and Terence. Dyskolos (“The Crabby Man”), which won first prize at the Lenaea festival of 316 BCE, is the only complete play by Menander to have survived. After being lost for over 1000 years, it was rediscovered by chance in the late 1950’s, preserved in a papyrus codex from Egypt.

The plays of Menander are composed entirely in verse; some sections are intended to be spoken, others to be chanted or sung to the accompaniment of an oboe-like instrument called an aulos. A chorus would have entered and performed a song-and-dance routine in between each of the five acts. We have eliminated the chorus but set portions of the play to music.

While we have generally remained faithful to Menander’s text, we have taken the liberties of making Knemon a widower, giving names to Knemon’s daughter and Sostratos’ mother, and tripling the number of cooks. In the original production the actors would all have been male and worn masks.

The setting of Dyskolos is Phyle, a village on the slope of Mt. Parnes, about thirteen miles northwest of the city of Athens, in the region of Greece known as Attica.

PLOT SUMMARY
Prologue: The prologue is spoken by Pan, a goat-horned shepherd god who spends his time dancing and playing music on his pipes, sometimes shouting so loudly that he causes a “panic” in his listeners. His country shrine happens to be located right next to the house of Knemon, a gruff, frugal farmer who is so crabby and anti-social that he has not bothered to find a husband for his lovely daughter. Feeling sorry for poor, unwed Parthenis, Pan has intervened: he has magically inspired Sostratos and the rest of his family to travel from Athens to the Attic countryside to enjoy the outdoors and to sacrifice a sheep in Pan’s shrine. Sostratos has caught sight of Parthenis and immediately fallen in love with her.

Scenes 1-3: Sostratos enters, speaking with his happy friend Chaireas, who has come along for the picnic. When Chaireas will not believe that Sostratos is truly in love, Sostratos sings a song that finally convinces him (Song #1). Suddenly Sostratos’ slave Pyrrhias rushes in; Sostratos had sent him to locate the girl’s father and request permission to marry her. Rather than listening to Pyrrhias, Knemon has thrown pears at him! Knemon himself then appears and sings about how upset he is; he is joined in his song by his old maid Simiche, who is nearly as crabby as he is (Song #2). Sostratos is too scared to talk with Knemon, who goes inside his house. Chaereas and Pyrrhias wander off to get a snack.

Scenes 4-6: Simiche has accidentally dropped the bucket down the well inside Knemon’s house. She asks Parthenis to get her some water from Pan’s shrine. Sostratos sees the girl and offers to do the task for her. As he comes back out of the shrine, the slave Daos observes them conversing. Daos’ master is Gorgias, Knemon’s stepson and the half-brother of Parthenis. Never having seen Sostratos before and being suspicious of his intentions, Daos leaves to find Gorgias—and immediately runs into him. The two of them approach Sostratos and ask him what he is up to. With the help of Chaireas and another song (Song #3), Sostratos wins their support. They tell the city boy that he will never win Knemon’s consent to the marriage unless he looks like a farmer. Sostratos agrees to take Daos’ place and go digging with Gorgias; Daos, delighted to have a break from work, gives his hoe to Sostratos.

Scenes 7-9: The three hired cooks arrive, having some trouble with sheep escaping. Sostratos’ mother Myrrhine, his sister Plangon, and his father Kallippides then enter, having some difficulty communicating. While the family are in the shrine, getting ready for lunch, the cooks come out, distressed because none of them has remembered to bring a pan. Their attempt to borrow one from Knemon fails miserably, leading them to put their request in the form of a song (Song #4). They return, pan-less, to the shrine. Meanwhile Daos gives a tour of the countryside to Pyrrhias (who in our version is a Roman, enslaved while on vacation in Greece).

Scenes 10-12: Simiche reports that she has lost both a rake and a bucket in the well; furious, Knemon says that he will pull them out himself. As Sostratos and Gorgias return from the farm, they hear the sound of Knemon falling into the well. Gorgias rushes inside to help. The injured Knemon is carried out of his house. Experiencing a change of heart, he gives Gorgias authority to find a husband for Parthenis. Knemon approves of Sostratos’ sunburn and goes back in the house. Kallippides, Myrrhine, and Plangon arrive. Sostratos tries to persuade his parents to let Gorgias marry Plangon as a reward for the help he has given that day; they are reluctant at first but eventually sing themselves into agreement (Song #5). Knemon and the cooks return, and the play concludes with multiple wedding celebrations and happiness for all.